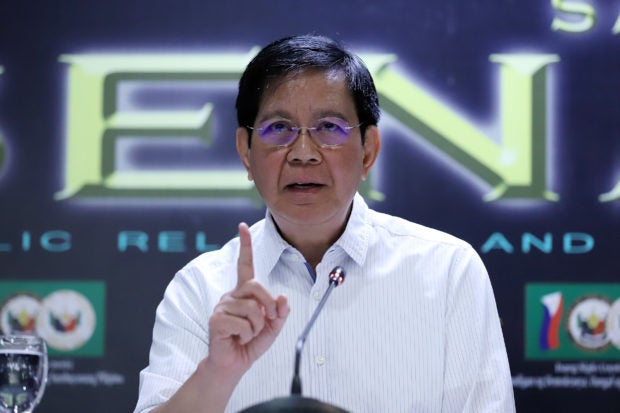 On Duterte’s order,  the  Philippines sent last February  11  a notice to the U.S. terminating the VFA. The abrogation will take effect  18 days after receipt of the notice.

“We’ve talked to several Cabinet members, I won’t mention anymore at baka malasin pa. But they are actually against the abrogation, openly,” he said at the regular forum in the Senate on Wednesday.

“At least pag kami-kami lang,  hindi naman sila nag-hesitate magsabi na mali talaga yung  decision to abrogate because we have not prepared for it,”  he said, noting the  “tangible” and  “intangible”  benefits the Philippines gets from the  VFA.

The country, he said, has so far received about $1.3 billion worth of military aid and assistance since the VFA took effect in 1999.

Lacson pointed out that since 2016   alone when Duterte and U.S. President  Donald  Trump came into power, the Philippines received  $900M worth of benefits from the  US.

“This is not counting the technical intelligence sharing provided by the US, both ways, kasi tayo nakakapagpo-provide din tayo  ng information sa kanila about terrorism, yung drug interdiction. Marami,  the whole gamut of benefits derived from the VFA, Mutual Defense Treaty and other similar treaties, nakapanghinayang lang,” he said.

Asked if there were  Cabinet members who tried to talk to the President against abrogating the VFA,   Lacson said: “Maraming takot kay Presidente sa…  well, nag-e-express sila  but you  know  lagi sila nananantsa ba, na kung how to bring it to his attention, how to dissuade him from proceeding sa abrogation.”

Besides, he said,  some believed that  Duterte had already made up his mind on the termination of the VFA.

Lacson said he will join his colleagues in the Senate in raising the  VFA issue before the Supreme Court to once and for all settle whether or not the Senate concurrence is needed when abrogating a treaty or an international agreement.