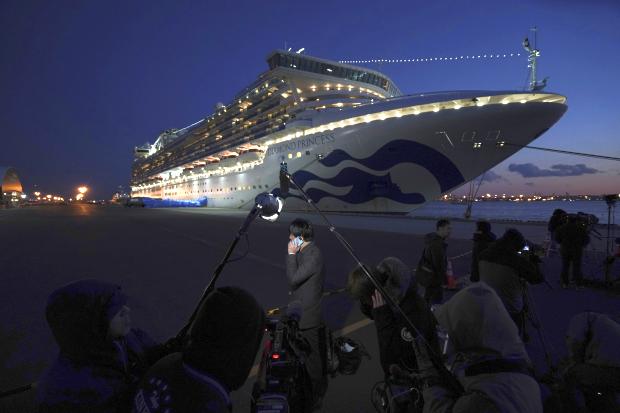 Journalists work near the quarantined Diamond Princess cruise ship sitting at the Yokohama Port Monday, Feb. 10, 2020, Yokohama, Japan. The operator of the ship said Monday that an additional 66 cases were found aboard. That is in addition to 70 reported earlier. (Photo by EUGENE HOSHIKO / AP)

MANILA, Philippines — The Philippine Embassy in Japan is preparing to repatriate more than 500 Filipinos from the cruise ship Diamond Princess quarantined off Yokohama, Japan, when the vessel’s 14-day isolation ends on Wednesday.

The Department of Foreign Affairs (DFA) on Monday said the embassy in Tokyo was coordinating with Philippine and Japanese government agencies, the World Health Organization (WHO) and the ship manager, Princess Cruises, “to ensure that the needs of the Filipino crew and passengers are met and to facilitate their return to the Philippines.”

Details of the repatriation were to be discussed during the meeting of the Inter-Agency Task Force for the Management of Emerging Infectious Diseases on Monday afternoon, according to Assistant Foreign Secretary Eduardo Menez.

As of Sunday, 27 of the 538 Filipinos aboard the Diamond Princess were confirmed to have been infected with the new coronavirus, according to the DFA. All the 27 are crew members.

Except for seven passengers, all of the Filipinos aboard the ship are crew members.

All those out of the 3,500 passengers and crew still aboard the vessel were to be tested for the new coronavirus beginning on Monday, in preparation for the lifting of the quarantine.

The DFA said the Japanese Ministry of Health announced that test results would be available by the end of the quarantine.

The ship was quarantined on Feb. 6, days after docking off Yokohama when authorities learned that a former passenger who disembarked in Hong Kong in January tested positive for the virus.

Once they arrive in the country, the Filipinos to be repatriated from the ship will again be placed under quarantine for 14 days as precaution against the spread of the new virus in the Philippines, Assistant Health Secretary Maria Rosario Vergeire said on Monday.

Vergeire said the new quarantine was necessary because the Filipinos were not exposed to the virus all at the same time.

“We must understand how they got infected [on] that ship,” Vergeire told a news briefing at the Department of Health (DOH).

Vergeire said the Japanese government had requested that all people on the ship be repatriated once the quarantine ended.

How to handle repatriates

Up to Monday, however, it was unclear how the government planned to handle the 538 Filipinos who would be repatriated from the ship.

Vergeire said the interagency task force had discussed the matter. “Currently we are in the planning and discussion stage,” she said.

On Feb. 2, the government repatriated 30 Filipinos from Wuhan, capital city of the central Chinese province of Hubei that is the epicenter of the new virus epidemic, and placed them on quarantine at Athletes’ Village in Capas, Tarlac province. Their 14-day quarantine ends this week.

Vergeire, however, could not say whether the Filipinos from the Diamond Princess would also be isolated at Athletes’ Village.

Local officials and residents of Capas protested the use of Athletes’ Village as quarantine, saying it could expose the town to the virus.

They also said they were not consulted before the interagency task force decided to bring the Filipinos from Wuhan to Capas.

Vergeire also gave assurance that the DOH would follow a more “comprehensive” process before recommending travel restrictions for other countries with confirmed cases of the virus.

The DOH drew flak last week for recommending a ban on all travel to and from Taiwan following the government’s One China policy. The government imposed the ban late Monday last week, forcing the cancellation of flights and leading to chaos at the airports in Manila and Taipei, where Filipinos returning to jobs or taking new jobs in Taiwan or returning home were stranded.

Taiwan vigorously protested the ban, arguing that it was separately governed from China and that the DOH should not have given significance to the WHO assessment that lumped the situation on the island with conditions in the mainland.

Taipei threatened countermeasures if Manila did not lift the ban. Manila lifted it on Friday.

The government has banned all travel to and from China and its two administrative regions—Hong Kong and Macau—to prevent the spread of the new coronavirus to the Philippines. Foreign Secretary Teodoro Locsin Jr., however, said on Saturday that the ban on travel to Hong Kong would be reviewed.

At her press briefing on Monday, Vergeire said the interagency task force had not yet discussed whether to expand the ban to include other countries.

Vergeire also said that the number of people under observation for the new virus in the Philippines had decreased.

As of noon Monday, she said, only 171 people were still in hospitals across the country. A total of 350 patients, including two Chinese nationals who had tested positive but had recovered, have been discharged, she said.

Vergeire said 453 patients had tested negative for the virus, while 22 were still waiting for test results.