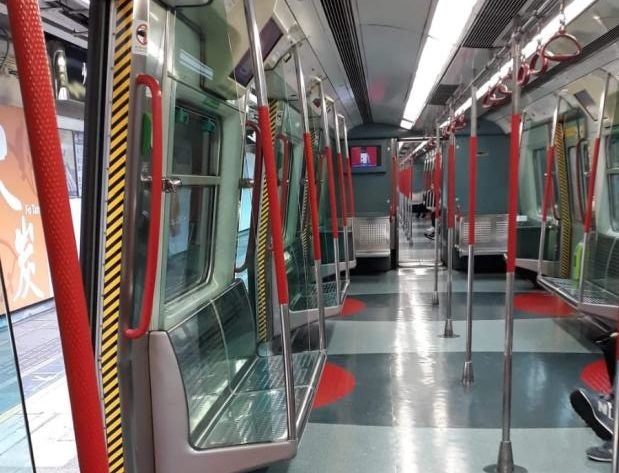 This train which normally would be bursting at the seams with Filipino workers in Hong Kong’s New Territories is nearly empty on a Sunday, Feb. 9, 2020. Sunday is when Filipino household employees usually gather. (Contributed photo)

MANILA, Philippines – Overseas Filipino workers (OFWs) who are currently stuck in the Philippines are urging the government to lift the travel ban to Hong Kong out of concern for their jobs and relatives in the Asian financial hub.

According to Eleveneth Baldero, a household worker in Hong Kong, she is risking the termination of her job for not returning to her employer.  But aside from that, Baldero says that her family has already been financially affected with her not being able to work.

Hong Kong is included in the travel ban imposed by the Philippines on the People’s Republic of China (PRC), to avoid the spread of the COVID-19, formerly known as the 2019 novel coronavirus  COVID-19 originated from Wuhan City and has downed over 71,000 individuals and killed 1,775 people.

“We are affected by the travel ban because contractual workers like us are fearful of getting terminated if we are unable to return back to our employers on time. My contract is set to expire on 6 March that is why I’m really worried,” she said during a briefing sponsored by group Migrante International on Monday.

“Financially, I am running out of money to sustain my stay here in the Philippines. This is why I really need to return back to Hong Kong,” she added.

Another OFW, Rowena Lee, meanwhile, is concerned about her ailing 75-year-old mother who was just recently discharged from the hospital

“My 75-year-old mother in Hong Kong still needs medical attention and I really want to return so I can be with her. She is all by herself. I was only allowed by our manager to spend my leave up to 28 February,” Lee noted.

“We hope that the government will lift the ban because we have needs to address and bills to pay like rent […] It will be very hard for us if we get forced by the situation to borrow money just to extend our stay here. I am pleading to the government to lift the travel ban so we can return to our normal lives,” she said.

After President Rodrigo Duterte banned flights to and from China due to the COVID-19 outbreak, the Bureau of Immigration explained that OFWs in the Philippines could not return for the meantime to Hong Kong, being a special administrative region of China.

Labor Secretary Silvestre Bello III previously said that the employment of the OFWs trapped due to the ban would not be affected, because their employers had already granted them extended vacations due to COVID-19.  In Hong Kong, there are already 58 COVID-19 cases, with one death.

However, former Filipino Migrant Workers’ Union chair Feliza Guy Benitez said that the leave granted to OFWs wold only last for 14 days, and they might get terminated after that period.

“If OFWs get terminated because they exceeded the 14-day leave, it will be hard for us to get back again to zero just to process all the application papers and the government won’t even pay for it.” Benitez asserted during the briefing.

But a joint appeal from the OFWs insisted that such financial assistance was not enough to cover the needs of the stranded worker and their families.

“Each stranded OFW was offered Php10,000 compensation from the OWWA Fund, an amount that would not even pay for the expenses they had to bear after being stranded at the airport,” the joint statement said.

“Moreover, non-OFWs were given no help at all, when many of them don’t even have houses in the Philippines and have to pay for food and lodging while waiting for the ban to be lifted. They are also in danger of suffering even more if they lose their jobs, as they pay high rents and other expenses such as school fees for their children in Hong Kong,” they added.