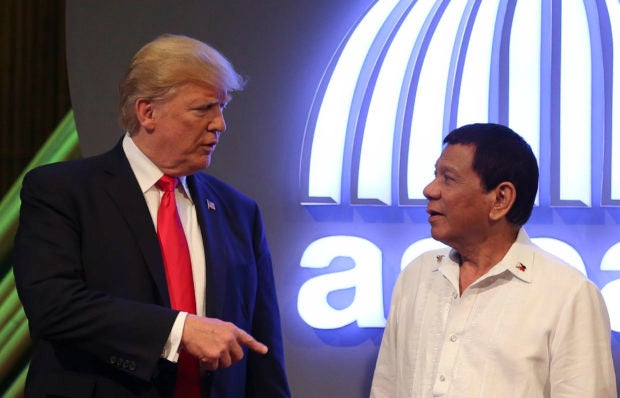 In this file photo, dated Nov. 13, 2017, US President Donald Trump and President Rodrigo Duterte are seen together during the 31st Asean Summit in Manila. The US leader said he didn’t mind that Duterte scrapped the 1999 Visiting Forces Agreement because it would save money for his government. (File photo from the Philippine Daily Inquirer)

MANILA, Philippines — Because of his remarks regarding the Philippines’ decision to scrap the Visiting Forces Agreement (VFA), US President Donald Trump deserves to be re-elected, President Rodrigo Duterte said, according to Palace statement issue on Saturday.

In a statement, Palace spokesperson Salvador Panelo added that, according to Duterte, if Trump were a Filipino and the sitting Philippine president, he would do the same thing too.

“The President said that if President Trump were a Filipino and the Philippine President, given his character and principled stand on a matter of national interest, he would have done exactly the same thing he had done, and if he were the  US President, he would have given the same reaction,” presidential spokesperson Salvador Panelo said.

“It is President Trump’s circumspect and judicious reaction to the termination of the VFA that made  PRRD gave the following remarks: ‘President Trump is a good President and he deserves to be re-elected,’” he added.

Trump previously stated that he was “fine” with the Philippines’ decision to terminate the VFA, adding that it would save the US government “a lot of money.”

The country’s rule to terminate the VFA was rooted in the cancellation of the US visa of Sen. Ronald “Bato” Dela Rosa’s — a Duterte ally.

“[Duterte] welcomes President Trump’s remarks and he is glad that the American President understands and respects his decision to end the Visiting Forces Agreement. In ceasing the effectivity of the VFA, he points to the legislative and executive actions of the US government, which we have previously elaborated, as his raison d’etre,” Panelo stated.

“The Chief Executive deemed such actions to be not only an offensive and blatant disrespect to our judicial system but an outright assault to the country’s sovereignty. As a matter of principle and national pride, being the head of an aggrieved and insulted state, he had been compelled to take a bold, decisive and studied action,” the spokesperson added.

Panelo further stated that the time of strengthening the country’s defense capabilities has come.

“Reliance on another country to defend our motherland from whoever desires to threaten our territorial integrity as well as to assault our sovereignty will only further weaken and stagnate our already limited resources,” he said.

“As the President says in rationalizing why we have fo stand-alone and depending on our own resources in fighting the enemies of the state: ‘Kung hindi ngayon, kailan pa?’ [If not now, when?],” he added.