Japan rapidly recovering beyond its expectations 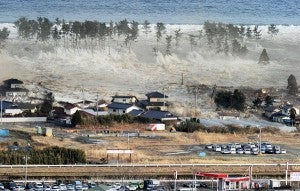 (Last of a series)

SENDAI, Japan—As one nears the airport here, an hour’s drive from the city center, one can notice backhoes in open spaces near the coast just as often as seeing carabaos or threshers in rice fields along the North Luzon Expressway in the Philippines during the harvest season.

Not far from the backhoes are mounds of debris, an indication of the relentless drive to clean up the wreckage and detritus left by the earthquake-induced tsunami that swamped this city on March 11 this year.

Roads and basic infrastructure have been repaired, and the evacuees housed in newly built rows of prefabricated housing units.

In some respects, the Sendai airport, a regional transportation hub a kilometer from the coast, symbolizes the quickness by which Japan has gotten back on its feet.

Looking spic-and-span is the three-story terminal, which now hums with activity as passengers arrive or leave on domestic and international flights.

The terminal hardly shows traces of the earthquake that felled 10 of its pillars and of the damage caused by a 3-meter wall of seawater that swamped its lobby.

Noriyuke Shikata, a deputy Cabinet secretary, described the rapid recovery of the country’s supply chain as “beyond our expectations.”

This was evident in the 6-percent annualized growth that Japan posted in the third quarter, its first economic expansion in four quarters.

The International Monetary Fund expects the Japanese economy to grow by 2.3 percent in 2012, the highest growth rate among developed countries, according to Nishimiya.

The lower house of the Diet (parliament) approved this month a third supplementary spending package of  12 trillion yen (about $155 billion).

Over the next 10 years, Japan plans to spend 23 trillion yen, 19 trillion of which is to be disbursed in five years, for the reconstruction of regions devastated by the natural and nuclear disasters, according to Ando.

The government has come up with guidelines for reconstruction, based largely on the report to the Prime Minister of the Reconstruction Design Council.

The report, titled “Towards Reconstruction: Hope Beyond the Disaster,” was prepared by 16 people, including academicians, writers and governors of prefectures. Its special adviser and honorary chair was Takeshi Umehara, a philosopher.

Ando said Umehara was included in the advisory council to provide the cultural and historical inputs.

Among the council’s recommendations was the development of tsunami-resilient communities.

“Before, we focused on preventing damage from disaster. The idea still holds but the tsunami taught us that this can be ‘overruled’ by a major disaster,” Ando said.

He said there was a need to train residents to escape from areas about to be hit by a tsunami.

The advisory council elaborates on this idea.

“If we base our efforts on a concept of ‘disaster reduction,’ we must certainly focus on people-oriented measures that move away from an exclusive reliance on waterside defensive structures. Instead, we must engage in thorough disaster-prevention education founded on the fundamental concept of ‘escape’ and develop hazard maps,” it said.

“Furthermore, in addition to breakwaters, the function of setback levees must be enhanced, utilizing transport infrastructure and other means. Land will also need to be raised on man-made earthworks, where areas, routes and buildings for evacuation can be developed,” the council said.

To address the aging and population loss in the Tohoku region, the reconstruction office seeks to promote new industries and employment opportunities.

Ando said part of the strategy was to create high added-value by pushing for what he called the “sixth industry.”

He said this would involve promoting environmentally sound agriculture, logistics, marketing and distribution.

Renewable energy, including a smart grid, will also be promoted.

The design council said it was impossible to reconsider reconstruction without addressing rebuilding the areas affected by the nuclear accident.

It said a major premise of the reconstruction was “bringing the nuclear accident to a conclusion as quickly as possible.”

The council said it was important to give the Japanese people a sense of security and trust by “transmitting accurate information about the nuclear accident through continuous information disclosure, including the release of primary data that have strong scientific grounding.”

Part of the rebuilding plan is to put up special economic zones, which will offer tax incentives and streamlined regulations and administrative procedures.

“A small town may prefer an economic zone. A city may propose another,” Nishimiya said. “I hope foreign firms will come in, too.”

Financing all this will require issuing reconstruction bonds and imposing temporary tax measures.

“How to finance that by taxation is a political debate. But there should be some tax increase for a time,” Nishimiya said.

The council also recommended the building of “an inclusive society that does not leave anyone out by being mindful of those who are able to easily voice their views.”

It identified these people as the youth who have yet to find their place in their communities, the elderly and persons with disability who tend to be isolated, and women who have difficulty voicing their opinions.

But Hiroyuki Takeuchi, chief of reporters of Ishinomaki Hibi Shimbun, thinks that members of Parliament do not listen to the voices of disaster victims.

“It seems that they do not care about the real situation here (Ishinomaki) but more of the situation in Diet,” Takeuchi said last month before the Diet passed the third supplementary spending package for reconstruction.

Takeuchi lives on the second floor of his house along with his wife, three children and parents who are already in their 80s because the first floor was destroyed by the tsunami. Their water service has not been restored.

The advisory council’s last recommendation was for Japan to record and preserve the lessons it learned from the recent disasters and share these with the world.

“(T)o ensure that the Great East Japan Earthquake is not forgotten, it is hoped that tree species native to the disaster-affected regions will be selected to create a ‘Memorial Forest’ through the participation of many people and on the initiative of local communities,” the council said.