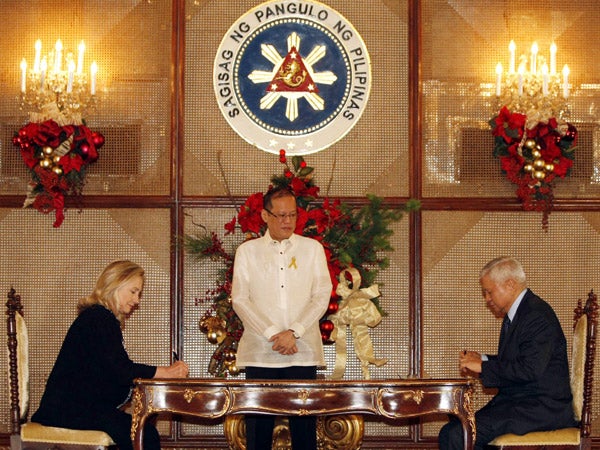 HILLARY IN MANILA President Aquino witnesses Wednesday’s signing of an agreement of partnership for growth between US Secretary of State Hillary Clinton (at left) and Foreign Secretary Albert del Rosario in Malacañang. It is a five-year Obama initiative by which a US team will work with Filipino partners to create a more transparent business environment. Clinton, here for a two-day visit, left on Wednesday. AP PHOTO

Visiting US Secretary of State Hillary Clinton on Wednesday vowed “greater support for external defense” of the Philippines amid rising tensions with China over the Spratlys and invited President Benigno Aquino III to make a state visit to Washington early next year.

Clinton made an overnight stop in Manila en route to the East Asia Summit in Bali, Indonesia, to mark the 60th anniversary of the RP-US Mutual Defense Treaty (MDT), declaring in a news conference at Malacañang that the accord “has to be updated and brought to the 21st century.”

“That will require working with the Philippines to provide for greater support for external defense, particularly maritime domain awareness, defensive ones, maritime boundaries,” she said at the close of a two-hour call at Malacañang.

“We want to be very sensitive to the requests and needs of the government of the Philippines and we want to make it clear that our military relationship, like any aspect of our relationship, is one based on mutual respect and mutual interest and we think that the time has come for us to look into how we can update our military relationship moving into the future, knowing that there are new challenges and new opportunities for us to be working together,” she said.

“We are looking forward to President Obama welcoming President Aquino to the White House, to the Oval Office sometime early next year because we have a lot of work to do,” she said at the news conference with Foreign Secretary Albert del Rosario.

Clinton said she and US Defense Secretary Leon Panetta will meet with Del Rosario and Defense Secretary Voltaire Gazmin in Washington in January to look at the military partnership of the two countries—something that she stressed the United States had only previously done with major allies Japan, Australia and South Korea.

Earlier on a steaming hot day on Manila Bay, Clinton boarded the USS Fitzgerald, a US Navy destroyer based in California, as she signed a declaration marking the MDT’s 60th anniversary.

“We must ensure that this alliance remains strong, capable of delivering results for the people of the Philippines and the United States and our neighbors throughout the Pacific,” Clinton said from the deck of the warship.

Later in Malacañang, she told reporters, “Let me say, the US will always be in the corner of the Philippines. We will always stand and fight with you to achieve the future we seek.” She made the remark while praising the controversial victory of Manny Pacquiao over Mexican boxer Juan Manuel Marquez at the weekend in Las Vegas.

The Palace discussions with Mr. Aquino and Del Rosario covered areas where priorities converged and how the Philippines and the United States could work together, she said.

Clinton stressed that the United States was very much committed to Asia and the Pacific and would engage in discussions of “maritime security challenges in the region and how to address them cooperatively.”

She said the participation of the United States in the US-Asean meeting in Bali this week sent a “very strong message what our level of commitment is to this region and to the many issues that we confront.”

Mr. Aquino and Obama will cochair the US-Asean meeting in Bali. The two leaders are to meet in the Indonesian resort island on Friday.

Asked whether the United States would support the Philippines’ bid to validate its territorial claims in the Spratlys before the United Nations, Clinton said that Washington “strongly” holds the view that the dispute of the Philippines and China over the West Philippine Sea, using Manila’s reference to the South China Sea, “should be resolved peacefully.”

“The United States does not take a position on any territorial claim because any nation with a claim would have the right to assert it, but they do not have the right to pursue it through intimidation or coercion. They should follow the international law, the rule of law, the UN Convention of the Law of the Sea (Unclos),” she said.

For his part, Del Rosario reiterated that the country sought to have a peaceful resolution in its dispute with China and wants a multilateral approach to various claims on the Spratlys.

But at the same time, he said that the country was “interested in being able to validate our claim” in the disputed area through the UN convention and possibly via compulsory conciliation.

“We will in all likelihood proceed to the (compulsory conciliation) mechanism and be able to secure a validation of our claim from that particular mechanism,” Del Rosario said.

The Philippines bases its claim to a part of the Spratlys, which are also being claimed by Taiwan, Malaysia, Brunei and Vietnam, on Unclos, which establishes jurisdiction over natural resources 200 nautical miles (370 kilometers) from the country’s coast.

There have been concerns about China’s enforcement of its claim this year in areas claimed by Vietnam and the Philippines, including the cutting of cables on survey ships, threats to ram some vessels and breaches of air space by military aircraft.

Clinton said the United States regarded the Philippines as a “trusted ally, a nation that shares our democratic values, the ancestral home of Filipino-Americans, and an important trade and development partner.”

“And may I add, a country with one of the highest Facebook penetration rates in the world,” she said, eliciting laughter from the audience.

She said that Filipinos like Americans were “eager to connect, to seize new opportunities, to have a voice in their own country and in global debates.”

President Aquino conferred on Clinton the Order of Lakandula with the rank of Bayani.

Clinton and Del Rosario also signed a joint statement of intent on the Partnership for Growth between the United States and the Philippines, a five-year Obama initiative on global development.

“Through the Partnership for Growth, a team from across the US government will work closely with partners in the Filipino government to create a more transparent and predictable business environment, lower barriers to trade and strengthen the rule of law as well as fighting corruption,” Clinton said.

“Together we hope to deliver an array of benefits to the people, including foreign investment, to create new jobs, a more streamlined court system that can deliver justice and protect local businesses, better services and more resources to fight poverty,” she said.