US Defense Secretary: Termination of VFA ‘a move in a wrong direction’ | Global News

US Defense Secretary: Termination of VFA ‘a move in a wrong direction’ 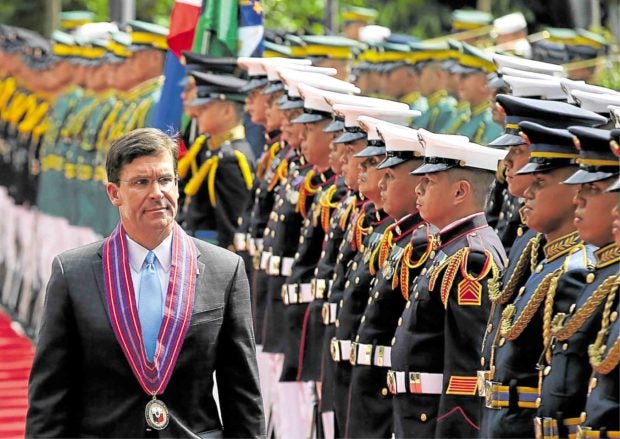 MANILA, Philippines — United States Secretary of Defense Mark Esper said that the looming termination of the Visiting Forces Agreement (VFA) with the Philippines “would be a move in the wrong direction.”

Speaking to reporters while en route to Europe, the top American defense ranking official said it was “unfortunate” that the Philippines had to make such move at a time when the U.S. and its allies are pushing China to abide by international norms.

“I do think it would be a move in the wrong direction as — as we both bilaterally with the Philippines and collectively with a number of other partners and allies in the region are trying to say to the Chinese, ‘You must obey the international rules of order. You must obey, you know, abide by international norms,’” he told reporters.

“And as we try and, you know, bolster our presence and compete with them in this era of great power competition, I think it’s a move in the wrong direction for — for, again, for the longstanding relationship we’ve had with the Philippines for their strategic location, the ties between our peoples, our countries,” he added.

President Rodrigo Duterte on Tuesday ordered to send the formal notice to the U.S. of his decision to end the VFA, an agreement ratified in 1999 which covers the conduct of US troops who take part in military exercises in the Philippines.

Its termination would take effect 180 days after Washington receives the notice.

“We just got the notification last night. We’ve got to read it. We’ve got to digest it. One hundred and eighty days. We’ve got to work through it, and — and we’ll just take a deep breath and take it one day at a time,” Esper said.

The ranking U.S. defense official visited the Philippines in November to discuss various issues and he said he thought the alliance was going well.

Duterte pursued with the termination despite his foreign and security officials speaking in favor of it at a Senate hearing last week.

Philippine officials that American presence served as a deterrent to China from taking more aggressive actions in the West Philippine Sea.

After the Philippine Senate rejected a new treaty that would have prolonged the stay of U.S. bases in 1992, China saw an opportunity to build structures on Mischief (Panganiban) Reef.

Duterte threatened to terminate the security agreement after Washington reportedly canceled the U.S. visa of a loyal ally, Sen. Ronald dela Rosa, who was linked to human rights violations when he first enforced the President’s deadly anti-drug crackdown as the national police chief in 2016.

Thousands of mostly poor suspects have been killed under the bloody campaign Duterte launched when he took office in mid-2016, alarming the US and other Western governments and human rights watchdogs.

Duterte gave the U.S. a month to restore dela Rosa’s visa, but U.S. officials have not publicly reacted to the Philippine leader’s demand.

Duterte said in a speech late Monday that President Donald Trump has moved to save the agreement but added that he rejected the idea.

He accused the US of meddling in Philippine affairs, including seeking the release of opposition Sen. Leila de Lima, whom he has accused of involvement in illegal drugs. She has dismissed the allegation as a fabricated charge meant to muzzle dissent.

“America is very rude. They are so rude,” Duterte said. With Associated Press