MANILA, PHILIPPINES, 6th February 2020 – For the second month in a row, the Manila Electric Company (Meralco) announced today a downward adjustment of power rates, as the overall rate for a typical household consuming 200kWh decreased to its lowest level in two years of P8.8623 per kWh this February from last month’s P9.4523 per kWh. This is also lower than that of ten years ago, February 2010, which was P9.0331 per kWh. 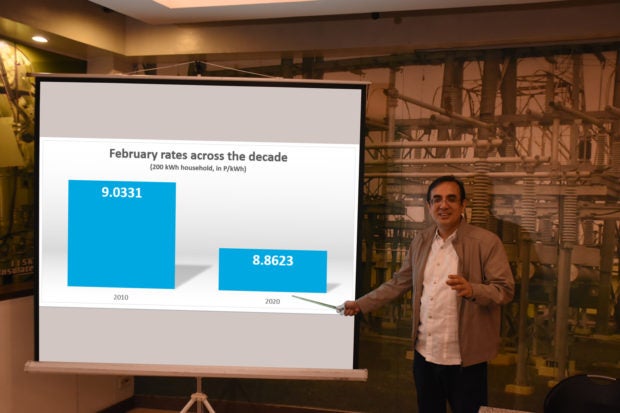 The reduction is mainly due to a lower generation charge after the implementation of new Power Supply Agreements (PSAs) starting last December 26. These PSAs were secured after a successful competitive selection process (CSP) under the guidance of the Department of Energy (DOE) and the expeditious provisional approval of the Energy Regulatory Commission (ERC).

The overall rate reduction of P0.5900 per kWh will mean a decrease of around P118 in the typical household’s total electricity bill for February.

The back-to-back months of rate decrease to start the year total P1.00 per kWh and goes against the usual trend of February rates adjusting upward due to price normalization after reconciliation of outage allowances, as seen in the previous five years.

Meanwhile, charges from the Wholesale Electricity Spot Market (WESM) also decreased this month, driven by lower power demand and improved supply conditions in the Luzon grid.  The WESM rate for February is P3.0529 per kWh. The share of WESM to Meralco’s supply needs increased to 23%.

These offset the cost of power from Meralco’s Independent Power Producers (IPPs) and old PSAs, which increased by P0.7429 per kWh to P5.2920 per kWh, mainly due to lower average plant dispatch resulting from the scheduled outage of Quezon Power and First NatGas-San Gabriel from January 17 to 25 and January 4 to 23, respectively.  The IPPs and old PSAs accounted for 56% of total supply.

Meanwhile, taxes and other charges registered a decrease of P0.2839 per kWh.

The Feed-In-Tariff Allowance (FIT-All) went down by P0.1731 per kWh after the ERC approved a lower FIT-All rate of P0.0495 per kWh as compared with the previous subsidy of P0.2226 per kWh.  There was also a P0.0543 per kWh reduction in the Universal Charge after PSALM said that it completed the collection of NPC’s stranded contract cost recovery.

These cushioned the impact of a P0.0888 per kWh increase in the transmission charge for residential customers, which was a result of higher NGCP ancillary service charges.

Meralco’s distribution, supply, and metering charges, meanwhile, have remained unchanged for 55 months, after these registered reductions in July 2015. Meralco reiterated that it does not earn from the pass-through charges, such as the generation and transmission charges. Payment for the generation charge goes to the power suppliers, while payment for the transmission charge goes to the NGCP. Taxes and other public policy charges like the Universal Charges and the FIT-All are remitted to the government.

As we approach the summer months, Meralco encourages its customers to continue practicing energy efficiency initiatives to help manage their electricity consumption. These include everyday household tips that may help save energy, such as: (i) unplugging appliances when not in use to avoid “phantom load”, (ii) using the aircon at mid-setting or at 25 degrees Celsius for maximum efficiency, (iii) using a power board or strip which can supply power to several appliances at once and allows a user to conveniently turn them off simultaneously with just one switch, and (iv) maximizing natural light during daytime and keeping appliances well maintained to ensure optimal performance.