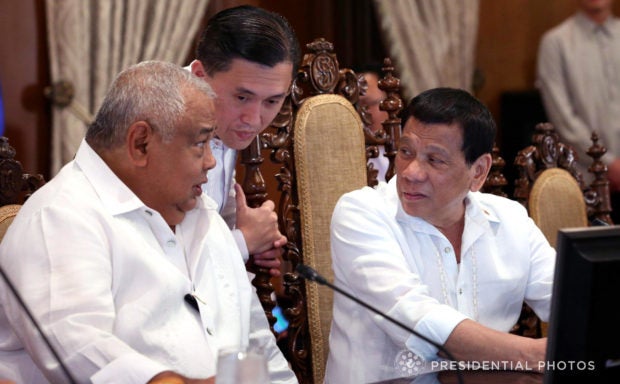 “I instructed the Executive Secretary to tell him [Foreign Affairs Secretary Teodoro Locsin Jr.] to send the notice of termination to the US government,” presidential spokesman Salvador Panelo told the INQUIRER.net in a phone interview.

“I said: Can I quote you on that? He said: Yes,” he added, speaking partly in Filipino.

According to Panelo, Duterte and US President Donald Trump are “expected to talk” anytime soon.

This developed after Locsin, during a Senate hearing on VFA termination, said that Duterte supposedly ordered him to hold off transmittal of the termination notice.

Duterte has ordered the termination of the military pact after the US canceled the visa of his longtime confidant Sen. Ronald “Bato” Dela Rosa, who also led his bloody war on drugs during his stint as national police chief.

The VFA, signed in 1998, accorded legal status to US troops who were rotated in the country for military exercises and humanitarian assistance operations.

Dela Rosa, who was Duterte’s chief of police from 2016 to 2018, said the US Embassy did not explain why his visa was voided. But he acknowledged it had something to do with the alleged extrajudicial killings under his watch.

This was not the first time Duterte threatened to scrap the VFA. However, the firebrand leader has claimed that he is “not joking” with the termination fo the military pact this time.