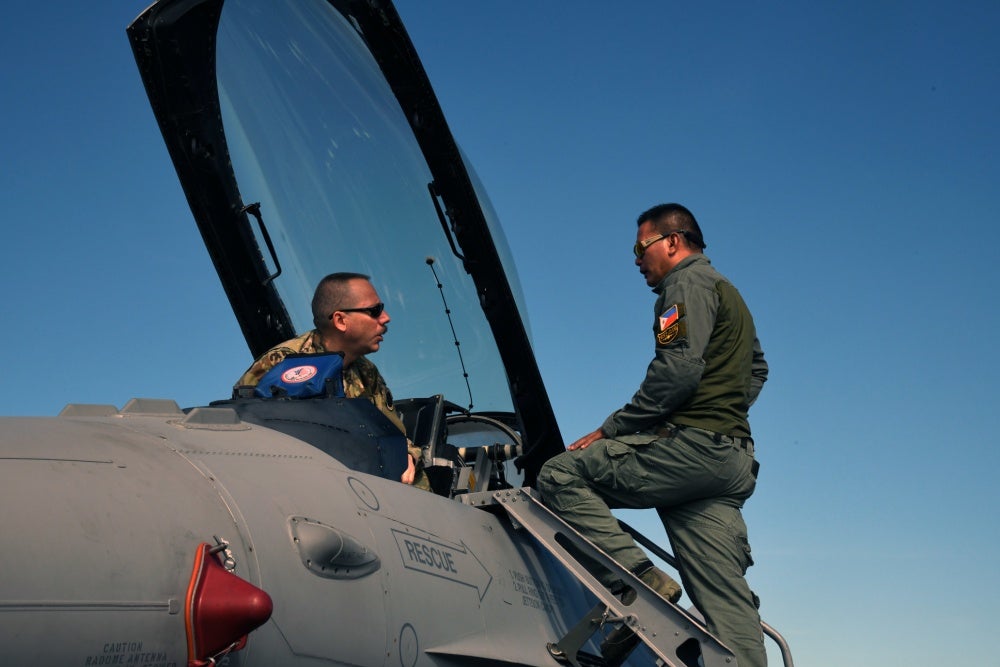 MANILA, Philippines — President Rodrigo Duterte’s threat to terminate the country’s Visiting Forces Agreement (VFA) with the United States has exposed the Philippine military’s need to improve its capabilities in more ways than one.

For many years, the Armed Forces of the Philippines relied heavily on the United States because of the military bases agreement that took effect starting in 1947 and allowed US military presence for decades. It was cut short in 1992 after the Philippine Senate rejected a new treaty that would have prolonged the stay of US forces in two of its key bases in the Philippines—the US Air Force’s Clark and the US Navy’s Subic.

Hermogenes Esperon, former Philippine armed forces chief and now national security adviser of Duterte, said the bases treaty gave the Philippines “all the weapons and all that we needed” for defense. “We were the first in Asia to have fighters,” Esperon said at a Senate hearing on Thursday (Feb. 6) on Duterte’s plan to junk the VFA.

“We were ahead. We have Blue Diamonds,” Esperon told senators, referring to a Philippine Air Force fleet of what were considered then as advanced military aircraft like the Northrop F-5 Freedom Fighter.

“We probably have the best ships in Asia at that time because they were all provided by the US and we thanked them for that,” said Esperon.

“But that was all part of the rentals,” he added, referring to war materiel being some sort of US compensation for American forces using Philippine bases.

But in the process, Esperon said the Philippines failed to develop its own military industry because it had been too dependent on the US.

Defense Secretary Delfin Lorenzana said at the same hearing that the Philippines had more than 100 helicopters and five C-130 cargo planes in the early 1990s.

“When they left, all the supplies, spare parts, everything, dried up,” he said, referring to the withdrawal of US forces from Clark and Subic which came after the treaty rejection by the Philippine Senate and coincided with the eruption of Mt. Pinatubo.

Before the 1990s ended, Lorenzana said there were only about three dozens of helicopters from the US that were left behind.

“I think the abrogation of the bases was predicated on the argument of the Senate then that they can replace all the funds being given to the armed forces,” he said.

“There is a lesson that I think we should learn very hard — that we cannot source our equipment from just one source,” he also said.

When the Americans left, the Philippine government crafted a military modernization plan which failed to take off. Esperon tried to explain the challenges in funding that the Philippine military faced through the years.

“For 15 years, we were supposed to get P30 to P50 billion a year and what happened?” he said, quickly adding, though, that he would discuss it extensively in executive session.

“By 2010, we should have developed our armed forces,” Esperon said.

“As of this year, we are already in the second tranche of the new modernization plan,” he said.

The current national budget, he added, had allocated P5 billion for modernization. But the amount, he said, “would be equivalent to something like probably 10 helicopters” only.

“So where are we getting the funds for our ships and our submarines, perhaps?” he added.

Being one of the weakest in the region, the Philippine miitary is currently trying to build up a credible defense system in the wake of China’s expansion in the West Philippine Sea.

Aside from the need to defend Philippine maritime territory against Chinese aggression, the Philippine military also has its hands full battling communist insurgents and terrorists.

In the 2020 national budget, the Department of National Defense is getting P192.1 billion. A big slice of the pie will go to personnel services and pension.

“The P119 billion I think is for personnel services. And you have to add some more for the pension fund of the retirees and veterans,” Lorenzana said.

If the Philippines doesn’t want to forever rely on the VFA, he said it needed to build up its own military.

“I think our long-term interest is to be self-sufficient in our defense,” Lorenzana said.

Duterte had threatened to throw out the military pact after the US revoked the visa of Sen. Ronald “Bato” dela Rosa, his close political ally and former police chief.

The US did not cite a reason for the visa cancellation but it was likely because of Dela Rosa’s role in Duterte’s bloody campaign against drugs.

The VFA, which was ratified by the Philippine Senate in 1999, covers the conduct of visiting American forces and serves as a foundation for joint exercises between the US and Philippine militaries.

“While the Philippines has the prerogative to terminate the VFA anytime, the continuance of the agreement is deemed to be more beneficial to the Philippines compared to any benefits were it to be terminated,” Foreign Affairs Secretary Teodoro Locsin Jr. said at the same Seante hearing.

“Terminating the VFA will negatively impact the Philippines defense and security arrangements as well as the overall bilateral relations of the Philippines with the US,” he said.

He said the absence of a VFA would result in a “severe curtailment of defense engagements” between the US and the Philippines and cancellation of defense cooperation activities.

But even as the country’s top diplomat pushed for a “vigorous review” of the agreement, he said the US should respect the Philippines’ sovereignty.

“Perhaps, we should review the VFA,” said Locsin.

“Certainly we should do that because I don’t believe that because we need them, we should suffer insults to our sovereignty,” he said, referring to US senators’ demand for the release of Sen. Leila De Lima as an example of US interference.

Since 2016, the amount of security assistance and security provided by the US amounted to $554.55 million, including $267.75 million in foreign military financing in procurement of weapons and equipment.

The current military equipment and assets of the Philippine military, Locsin said, are largely patterned after or provided by the US.

“Under the VFA, the Philippines was able to receive after sale servicing in the form of maintenance packages that increase the articles values and life span,” he said.

For 2020, Locsin said the US planned to spend over $200 million on aircraft, training, equipment and infrastructure for the AFP. More than $45 million is in the pipeline as foreign military financing.

“Without the VFA the US departments of State and Defense would be hard put to get funds from US Congress for foreign military financing and other assistance programs for the Philippines,” he said.