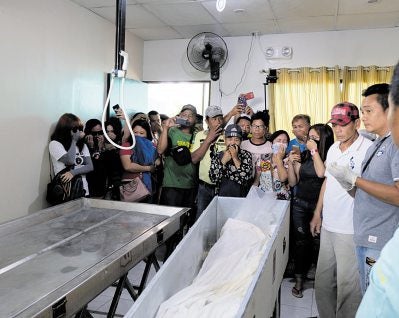 WAITING FOR JUSTICE Relatives of Villavende with her remains at a morgue in Norala, South Cotabato. —BONG S. SARMIENTO

MANILA, Philippines — Filipino maid Jeanelyn Villavende was raped before she was killed in Kuwait last month by her employers, according to the autopsy conducted by the National Bureau of Investigation.

The NBI autopsy also showed that the 26-year-old from Norala, South Cotabato, who began working as a maid in Kuwait only five months ago, had suffered from past beatings.

“There were clear indications of sexual abuse. There were also old healed wounds indicating that Villavende had been battered weeks prior to the fateful incident,” Justice Secretary Menardo Guevarra told reporters on Sunday.

The autopsy was conducted by NBI medicolegal chief Ricardo Rodaje on Jan. 10 near Villavende’s home in Norala.

The autopsy report will be submitted to Guevarra on Monday.

Villavende’s family appealed anew to President Duterte and Kuwaiti officials for justice after learning the results of the autopsy.

“We demand justice,” said Nelly Padernal, 42, Villavende’s stepmother. She said she had yet to see pictures of her stepdaughter’s employers in jail.

The Kuwaiti government’s autopsy report did not mention signs of rape or past abuse, angering the workers’ group Trade Union Congress of the Philippines (TUCP), which demanded the government respond strongly to the submission of what it called “fake autopsy report.”

“We strongly condemn this . . . fake autopsy report submitted by the Kuwaiti [authorities] to the Philippine government,” TUCP Rep. Raymond Mendoza said in a statement on Sunday.

He said the incomplete report showed “a willful dishonest attempt of the Kuwaiti government to cover up the heinous crime” committed by Kuwaiti nationals and “whitewash the gruesome act of inhumanity.”

The House of Representatives’ committee on overseas workers affairs has summoned the NBI forensic experts to report on the autopsy they had conducted on Villavende.

The committee headed by Mendoza will hold a special meeting on Monday to investigate the killing of the maid.

Officials from the Department of Foreign Affairs, Department of Labor and Employment, Department of Budget and Management, Philippine Overseas Employment Administration and nonprofits advocating migrant workers’ interests were invited to the meeting.

Speaker Alan Peter Cayetano, who had served briefly as foreign secretary, is pushing for long-term solutions to migrant workers’ problems.

He has proposed the creation of a department of overseas Filipino workers dedicated to dealing with migrants’ welfare and concerns.

The government has demanded the death penalty for Villavende’s employers, who have been arrested and detained.

Villavende died in a hospital on Dec. 28, according to Kuwaiti authorities. Her family learned about her death on New Year’s Eve when they received a call from the Department of Foreign Affairs.

Her murder prompted the government to ban the deployment of maids to Kuwait.

A similar ban was ordered in February 2018 after the body of missing Filipino maid Joanna Demafelis was found in a freezer in her employers’ abandoned apartment in Kuwait.

The government lifted the ban in May 2018 after it signed a bilateral agreement with Kuwait for the protection of Filipino maids against abuse at the hands of their employers.—With reports from Tina G. Santos, DJ Yap and Jeoffrey Maitem