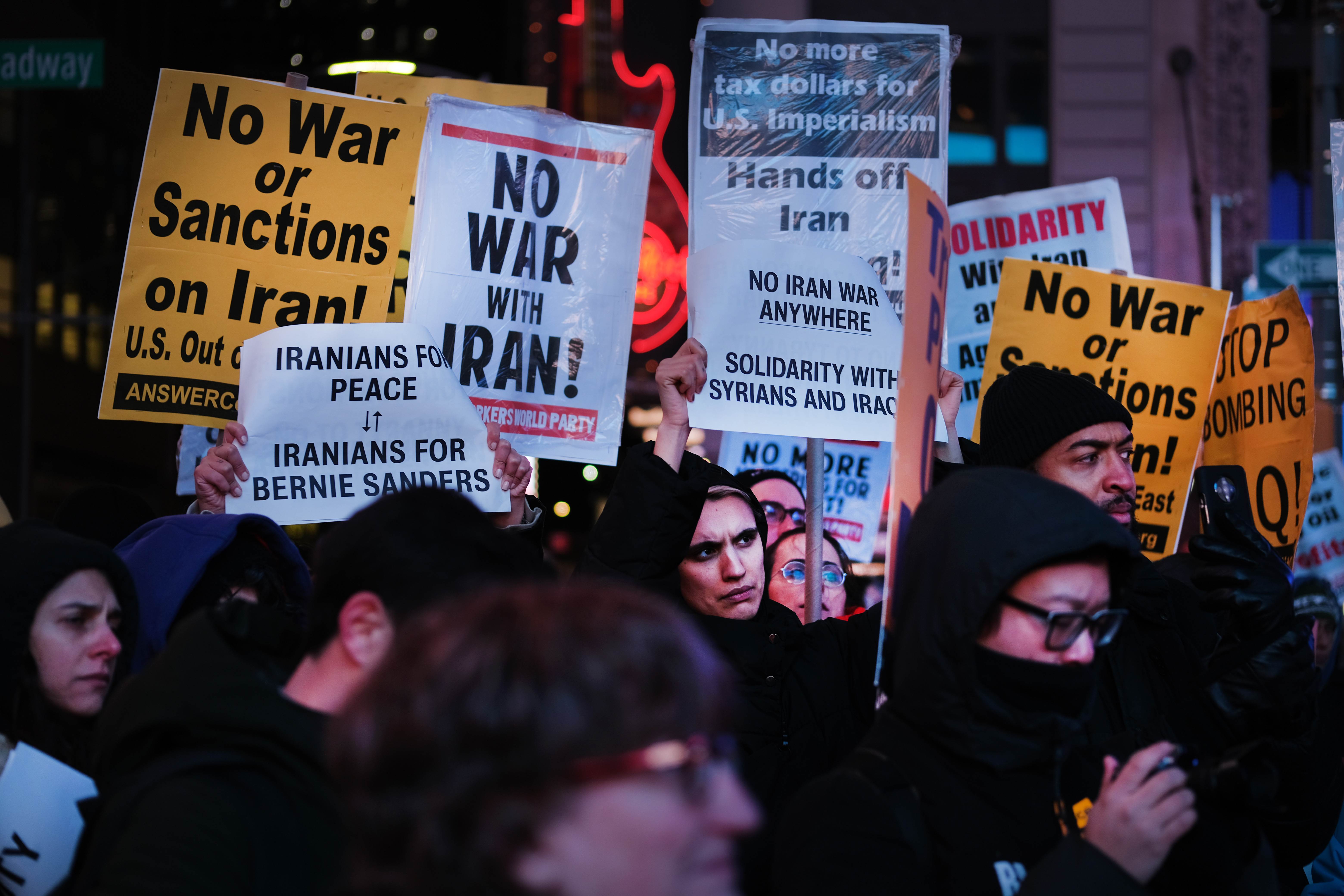 ‘NO WAR WITH IRAN’ People participate in a protest at Times Square in New York on Wednesday, opposing war with Iran after Iranian missiles slammed into bases in Iraq used by the US military in retaliation for the US killing of a top Iranian military general. The United States did not strike back and Iran took no further action, easing tensions in the Middle East. —AFP

MANILA, Philippines — Filipino workers in Iran and Lebanon can stay put, as they are no longer covered by the government’s mandatory evacuation order, the Department of Labor and Employment said on Thursday, a day after the United States and Iran stepped back from the brink, easing tensions in the Middle East.

Labor Secretary Silvestre Bello III, however, said the mandatory evacuation of Filipinos in Iraq would continue.

“Initially, the level of alert for Iran, Iraq and Lebanon was the same—level 4. Although it was unofficial, I was informed [on Wednesday] that the alert level in Lebanon had been put down to level 2, and I understand that there’s no more alert level in Iran,” Bello said in a statement.

Those ‘willing to return’

Alert level 4, which requires evacuation of citizens, remains raised in Iraq, he said. Despite the easing of tensions in the region, he said the government was maintaining a ban on the deployment of labor to Iraq, Iran and Lebanon.The Department of Foreign Affairs (DFA) said the highest level of security alert was being maintained in Iraq, but the government would bring home only Filipino workers “willing to return.”

Environment Secretary Roy Cimatu, whom President Duterte had assigned to oversee the evacuation, said the repatriation of Filipinos in Iraq would continue until the government was sure that there was no more danger to them.

“If you have to err, you have to err on the side of safety,” Cimatu told reporters at Ninoy Aquino International Airport (Naia) before flying to Doha, Qatar, on Thursday morning.

He said the situation in Iraq remained “unpredictable” and that “anything can happen.”

One “worst case scenario” the government was considering, he said, was an attack on US bases outside Iraq such as those in Kuwait, Bahrain and Qatar.

“We don’t have to wait for these to happen. We have to start now [by] moving them (Filipinos workers) out while the airports are still open and the roads are clear because if the situation deteriorates, it would be more difficult to get them out,” he told reporters at the airport.

Cimatu said logistics bases would be set up in Dubai in the United Arab Emirates, where Filipinos fleeing Iraq and other areas of conflict in the region would be taken before sending them home to the Philippines.

Till danger is over

In Malacañang, presidential spokesperson Salvador Panelo welcomed the deescalation in the Middle East but said the evacuation of Filipinos in the region would continue until the danger to them was over.

“There is a place where they will have to be evacuated, not repatriated immediately. For those who want [to return home]. Because you cannot also force [the] overseas workers if they prefer to stay, like in Iran where they’re married to Iranians,” Panelo said.

As of Tuesday, nearly 1,600 Filipinos in Baghdad had signified their willingness to leave, according to Cimatu.

“If they are ready, they can go. This is the time for them to get out while there are no military operations yet,” he said.

The government issued the mandatory evacuation order for Filipinos in the Middle East on Wednesday after Iran carried out its first act of promised revenge for the US killing last week of its top military general, Qassem Soleimani, firing at least 15 missiles on Iraqi bases used by the US military.

US President Donald Trump, however, said the United States would not retaliate, as no Americans were killed and the attacks did little damage to the bases.

Iran said it would take no further action.

Defense Secretary Delfin Lorenzana told reporters on Wednesday the government would send at least three military cargo planes and a newly built coast guard ship to get Filipinos out of harm’s way.

The coast guard vessel, BRP Gabriela Silang, which was en route to the Philippines from France, had been ordered instead to head to the Middle East to help with the evacuation.

Lorenzana said the vessel would likely shuttle Filipinos to Qatar.

“Once we gather them, we can maybe charter a plane or charter our ships to bring them home,” he added.

Civil Aviation Authority of the Philippines chief Jim Sydiongco on Thursday said his agency was coordinating with domestic and international airlines for help in flying Filipinos home in case the situation in the Middle East turned for the worst.

The management of Naia said it would provide holding areas for the processing and briefing of the evacuees.

The Bureau of Immigration, too, said it was bracing for an influx of Filipino workers fleeing the Middle East.

“I have directed our port operations division to see to it that adequate manpower is available to [handle] a possible upsurge in the number of passengers arriving from the Middle East,” Immigration Commissioner Jaime Morente said in a statement on Thursday. —REPORTS FROM TINA G. SANTOS, DONA Z. PAZZIBUGAN, JHESSET O. ENANO, JULIE M. AURELIO, JEROME ANING AND AFP