Tsunami fails to stop newspaper even if it’s 1 page, handwritten

(Second of a series) 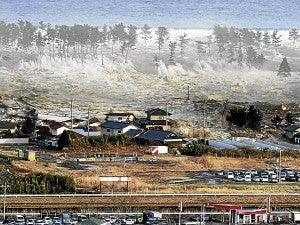 ISHINOMAKI, Japan—In this city where a Filipino woman died in the March 11 tsunami, a  newspaper provided information against all odds to people who needed it as much as food, water and shelter in times of great suffering and distress.

The earthquake and tsunami of 3/11 cut off its power supply, flooded the first floor of its two-story building, sent its computers falling off its desks, and caused a thick layer of dust to cover its offices.

But these did not stop Ishinomaki Hibi Shimbun, an evening paper, from coming up with an issue the next day.

It did so by going low-tech.

Its staff wrote articles by hand with black, red and blue felt-tip pens on newsprint, the size of a spread of its regular paper (55 cm by 82 cm or about 22 inches by 31 inches.)

The one-page handwritten newspaper was posted at evacuation centers and elsewhere in the disaster zone for several days until the power supply was restored.

“Evacuees asked the person who posted the newspaper to come back. They liked it,” Hiroyuki Takeuchi, chief of reporters, told visiting journalists from 10 Asian countries on October 27.

The March 12 edition had a banner headline that read, “Among the largest quake and tsunami disasters in Japan’s history.”

The next day the headline was “Relief supplies arriving from all over the nation.”

Takeuchi said people who suffered from the disaster needed not only food and water but also information.

A resident, who said he missed using the e-mail and surfing the Web, was quoted as saying days after the disaster that living with no electricity or water and not much food was hard enough.

“But the worst thing was that there was no information [from the electronic media],” Yutaka Iwasawa, 25, told the Washington Post.

The decision to come up with a wall newspaper was reached at a meeting with the company president on the night of the disaster.

“Our president said:  ‘The community we live in is suffering from so much damage. This is the time we have to do something. Otherwise, we have no reason to exist,’” Takeuchi said.

The company’s top executive said that what the newspaper could do was to send out information.

“Without electricity, we concluded that we could not publish the normal way,” Takeuchi said. “By that time all computers had fallen to the floor. We could not use them.”

A chapter from its history prompted the 99-year-old Ishinomaki Hibi Shimbun to produce a handwritten newspaper.

Takeuchi said the meeting recalled those who worked in the company during World War II, when the national government ordered that every prefecture should have only one newspaper.

“In Miyagi prefecture, the Kahoku newspaper  was it. But then people from other firms kept issuing their newspapers. Soon, the national government stopped them and the firms had to close down,” Takeuchi said.

But someone wrote what he felt and distributed it to his neighbors.

“We talked about that story that night. So we came out with handwritten newspapers,” Takeuchi said.

The newspaper stopped publishing the handwritten version on March 17 when electricity was restored at the home of the company president.

The A4-size edition lasted just for two days as the power supply was restored at the paper’s printing facility on March 19.

“The printing machine worked. Starting that day, we came out with the regular size,” Takeuchi said.

Copies of the handwritten newspaper have been kept for posterity in a museum in Washington D.C.

Seven copies have been donated to the Newseum, which is dedicated to providing the public with information on the history and latest technology in the news business.

After reading a news report about the plight of the staff of the Ishinomaki Hibi Shimbun, Newseum contacted the paper.

“Without the benefit of any of 21st century conveniences or technological advancements, and in the face of significant personal hardships, these journalists were distinctly committed to providing the community with critical information, and they used simple pen and paper to do it,” said Newseum curator Carrie Christofferson.

Six reporters are among the 28 people the  Ishinomaki Hibi Shimbun employs.

Despite slow business as a result of the disasters, the management announced that no employee would be fired, Takeuchi said.

Circulation is down to about 7,500 copies from 14,000. “That’s because (a number of) readers are not there,” Takeuchi said. “They have evacuated. The sponsors are the readers, too.”

Reflecting the slowdown, the number of pages has been reduced from eight to four, and the subscription rate has been cut by 500 yen to 1,280 yen/month.

The tsunami and earthquake killed 3,274 people in Ishinomaki, a city of some 162,000 residents before the disasters. A total of 706 were missing and were most likely carried to sea by retreating waters, said Ishinomaki Vice Mayor Etsuro Kitamura, who is now holding office in a mall because the tsunami damaged City Hall.

Other groups in Japan did their share in keeping people informed and connected to their loved ones.

The Softbank Group set up mobile and satellite stations to disaster areas in the Tohoku region.

“People appreciated us for being there. Just making one call meant so much [to victims and relatives],” Iida Tadashi of the mobile strategy planning department said at Softbank headquarters in Tokyo.

The group, which operates a mobile phone business, lent 17,000 cell phones to victims and groups helping them.

The day after the disaster, Softbank decided to offer free e-mail service for a week, provide free Wi-Fi spots and launched a fund drive that raised 200 million yen from subscribers.

A Web portal it created with Yahoo Japan Corp. matched services for people who wanted to help and for those who needed help.

Most of the items the Philippine Daily Inquirer received from its readers for disaster victims in Japan were distributed to residents in Ishinomaki by the Peace Boat.