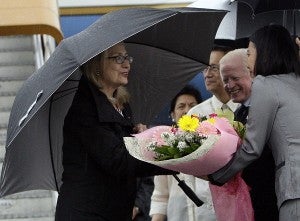 US Secretary of State Hillary Rodham Clinton holding her umbrella receives a bouquet of flowers upon arrival in Manila Tuesday. AP

US Secretary of State Hillary Clinton arrived in Manila on Tuesday for talks with President Beigno Aquino III amid high tension between the Philippines and China over the disputed Spratly Islands.

Hours before Clinton’s arrival, riot police blocked some 100 activists attempting to protest at the US Embassy the  visit to mark the 60th anniversary of the US-Philippine Mutual Defense Treaty (MDT).

Officials accompanying Clinton, whose plane made a brief refueling stop in the US territory of Guam, said she would meet with Mr. Aquino and tour a warship before flying later in the day to Bali, Indonesia, for the annual Association of Southeast Asian Nations summit.

The United States recently provided the Philippines with a destroyer and Clinton will discuss offering a second one, the officials said.

They said Clinton would also look for ways to step up cooperation at sea. Recent US military efforts with its former colony have focused on fighting Moro guerrillas in Mindanao.

“We are now in the process of diversifying and changing the nature of our engagement. We will continue those efforts in the south, but we are focusing more on maritime capabilities,” a senior US state department official said on condition of anonymity.

Cuisia, who was at the airport for Clinton’s arrival, said that her trip was meant to strengthen ties between the United States and countries in the region.

A US defense department official said that the United States was not seeking to stir up tensions in the West Philippine Sea (South China Sea), where China is locked in myriad disputes with countries including the Philippines and Vietnam.

The Philippines has “what they feel are legitimate claims in the South China Sea and they are being contested by other countries,” the defense official said.

“We’re very sensitive to making sure that this does not in any way alarm or provoke anybody else,” he said.

But relations between the United States and China have been uneasy, with President Barack Obama pressing President Hu Jintao during a weekend summit on a range of issues from intellectual property rights to the level of the Chinese yuan.

Obama welcomed leaders from 20 other Pacific Rim economies to the weekend summit in his native Hawaii where he built momentum for an emerging free trade agreement that would span the Pacific—but does not include China.

Clinton and Obama have vowed to put a new focus on the Asia-Pacific region, saying that the United States wants to help build the emerging institutions of the fast-growing region that is vital both for the US economy and security.

In a speech last week, Clinton said that the United States was “updating” relationships with its five treaty-bound regional allies—Australia, Japan, the Philippines, South Korea and Thailand.

“These five alliances are the fulcrum for our efforts in the Asia-Pacific,” Clinton said at the East-West Center in Honolulu.

While US policymakers have been upbeat about the Philippines under President Aquino, they have been concerned over Thailand after an extended period of political chaos.

Renato Reyes Jr., secretary general of Bagong Alyansang Makabayan, told the Philippine Daily Inquirer that the MDT had not been beneficial for the Philippines in the absence of the modernization of its military it was supposed to offer.

“The US government wants us to be content with receiving US military junk. The MDT has not modernized our Armed Forces. If anything, the MDT and similar military agreements have made us dependent on the US. They have made us weak and unable to stand on our own.”

The activist groups maintained that the Clinton visit sought to perpetuate 60 years of “deception and lopsided relations,” describing the MDT as a “Cold War relic.”

“Aside from the MDT, the VFA (Visiting Forces Agreement) should also be scrapped as it has been used not just for brief visits but for the permanent stationing of US troops in the Philippines. The Aquino government should stand for sovereignty and do away with mendicancy in its foreign relations,” Reyes added.

“We’re being hoodwinked into believing we have the unqualified support of the US for the Philippines’ Spratlys claim and that the MDT is the key to all this. The reality is that the US will not automatically go to war with China on the basis of the MDT alone. Military action would first require US congressional approval, which would be difficult considering America’s economic ties with China,” Reyes explained. With reports from AFP, Tarra Quismundo and Jeannette I. Andrade