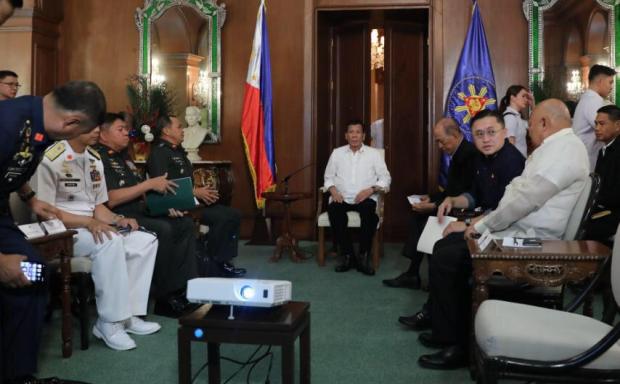 President Rodrigo Duterte presides over an emergency meeting held in Malacañang on Sunday, Jan. 5, 2020, about the possible repatriation of OFWs from the Middle East if the violence worsens in the region. (Photo from the office of Sen. Christopher Go)

MANILA, Philippines — President Rodrigo Duterte ordered the Armed Forces of the Philippines (AFP) on Sunday to get its air and naval assets for the evacuation Filipinos in the Middle East should hostilities further escalate in the region.

The President had an emergency meeting on Sunday afternoon in Malacañang with Defense Secretary Delfin Lorenzana and other top military and police officials, according to a statement issued by Department of National Defense (DND) spokesperson Director Arsenio Andolong.

“The sole agenda was how to ensure the safety of our countrymen in the Middle East especially those in Iraq and Iran as the tension between the US and Iran rises,” Andolong said. “The President has tasked the AFP to prepare its air and naval assets to evacuate and bring home our countrymen if and when open hostilities erupt in the Middle East that may endanger their lives.”

Earlier, the Department of Foreign Affairs (DFA) advised Filipinos to cancel all travel to Iraq as tensions escalate in the region after a U.S. airstrike near Baghdad’s airport killed Iran’s top general, Gen. Qassem Soleimani.

Filipinos in Iraq were also “strongly advised” to coordinate closely with the Philippine embassy and their employers in the event that mandatory evacuation would be necessary.

The crisis alert level for all areas in Iraq is currently on Alert Level 3, which prescribes for voluntary repatriation. The Iraqi Kurdistan region, however, remains under Alert Level 1, which is a precautionary phase.