300 Filipinos given temporary shelter as fires rage in Australia 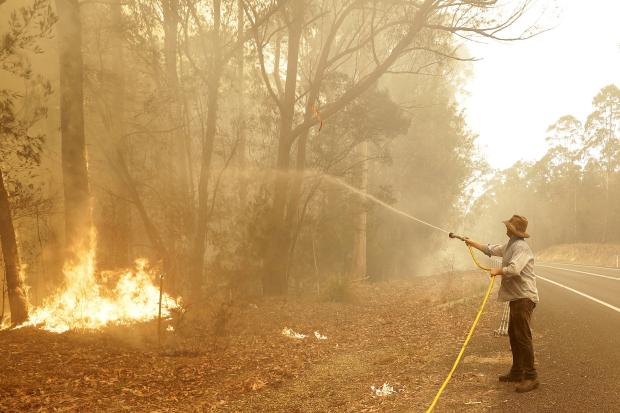 A man uses a water hose to battle a fire near Moruya, Australia, Saturday, Jan. 4, 2020. Australia’s Prime Minister Scott Morrison called up about 3,000 reservists as the threat of wildfires escalated Saturday in at least three states with two more deaths, and strong winds and high temperatures were forecast to bring flames to populated areas including the suburbs of Sydney. (Photo by RICK RYCROFT / AP)

MANILA, Philippines — Around 300 Filipinos have so far been evacuated and given temporary housing as catastrophic bushfires continue to blaze across Australia, an official from the Philippine Embassy in Canberra said.

“Just two to three days ago, we received reports from our Melbourne landing team… and we have an honorary consul in Melbourne. They both recently reported cases of Filipinos who have been affected by the bushfires,” Consul General Aian Caringal said in an interview with ABS-CBN News Channel on Sunday.

“There were 300 Filipino residents of Easy Gippsland in Victoria who have been evacuated to the city of Bairnsdale,” he added.

According to Caringal, the Filipinos who were evacuated were already being attended to by the local government and had been given temporary housing as well as emergency relief.

The bushfires, which have been raging since September, have reportedly ravaged nearly 12.35 million acres, or almost 5 million hectares of land, and burned almost 2,000 homes.

At least 24 people were reported to have died.

Caringal said only two Filipino-owned homes were reported to have been destroyed by the bushfires.

No Filipino was reported to be among the fatalities, he added.

No repatriation request yet

Caringal said the embassy had yet to receive a request for repatriation.

There are around 300,000 Filipinos living in Australia, he noted.

“If there would be any request we are ready to attend to the request and repatriate our kababayan [countrymen] as soon as possible,” he assured.

Caringal, meanwhile, advised Filipinos in Australia to “monitor the situation in their respective localities” and keep a list of the contact numbers of Philippine embassies, consulates as well local Filipino community organizations.