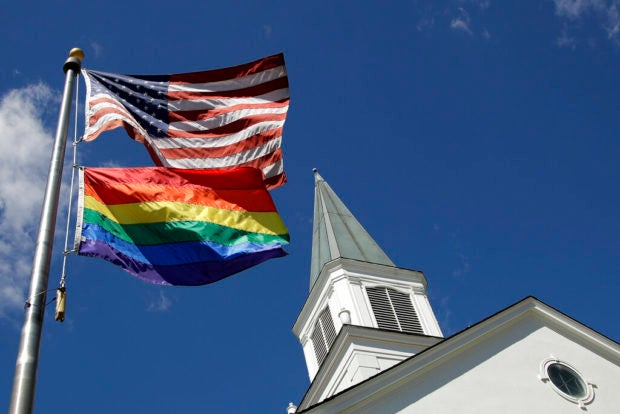 In this April 19, 2019, file photo, a gay pride rainbow flag flies along with the U.S. flag in front of the Asbury United Methodist Church in Prairie Village, Kansas. (AP)

NASHVILLE, Tennessee — United Methodist Church leaders from around the world and across ideological divides unveiled a plan Friday for a new conservative denomination that would split from the church in an attempt to resolve a decades-long dispute over gay marriage and gay clergy.

The proposal, called “A Protocol of Reconciliation & Grace Through Separation,” envisions an amicable separation in which conservative churches forming a new denomination would retain their assets. The new denomination also would receive $25 million.

The proposal was signed in December by a 16-member panel, who worked with a mediator and began meeting in October. The panel was formed after it became clear the impasse over LGBTQ issues was irreconcilable. The next step could come at the church’s General Conference in May.

Methodist Bishop Karen Oliveto, the denomination’s first openly gay bishop, said the United Methodist Church leadership “was clearly at a point in which we couldn’t agree to disagree” over same-sex relationships. “I’m actually really sad that we couldn’t build a bridge that could have provided a witness to the world of what unity amid diversity and disagreement could look like.” Oliveto was challenged by the denomination’s highest court, the Judicial Council, in 2017 when it declared that the bishop’s consecration “was incompatible with church law.”

However, Oliveto was allowed to remain as the resident bishop of the Mountain Sky Conference, which includes United Methodist churches in Colorado, Montana, Utah, Wyoming and a section of Idaho. Asked what a post-separation world looks like for the church to move forward, Oliveto said, “We are no longer using LGBTQ people as scapegoats.”

Members of the 13-million-person denomination have been at odds for years over the issue, with members in the United States leading the call for full inclusion for LGBTQ people.

The rift widened last year when delegates meeting in St. Louis voted 438-384 for a proposal called the Traditional Plan, which affirmed bans on LGBTQ-inclusive practices. A majority of U.S.-based delegates opposed that plan but were outvoted by U.S. conservatives teamed with delegates from Methodist strongholds in Africa and the Philippines.

Concern over the future of the church pushed members, led by Bishop John Yambasu of Sierra Leone, to convene a group to share ideas across the theological spectrum.

New York Bishop Thomas Bickerton said that turned into the final panel, made up of moderates, progressives and traditionalists from Africa, Europe, the Philippines and the United States.

Bickerton, who heads 438 Methodist churches in New York, said while he thinks it is an amicable solution, “there is a degree of heartbreak within me because I never thought we would reach this point. However, we are at this point. The differences are irreconcilable. This is inevitable.”

The Rev. Keith Boyette, president of the Wesleyan Covenant Association and one of 16 people on the mediation team that developed and signed the separation proposal, said he is “very hopeful” the plan will be approved.

While other mainline Protestant denominations have embraced gay-friendly practices, the United Methodist Church has not, though acts of defiance by pro-LGBTQ clergy have multiplied. Many have performed same-sex weddings; others have come out as gay or lesbian from the pulpit.

Texas Bishop Scott J. Jones praised the panel for its contribution to the ongoing discussions about human sexuality but “it should be emphasized that a statement by 16 leaders does not necessarily mean that its provisions will be adopted.”

“The Protocol itself says it was developed in service to the General Conference delegates who will decide on its adoption or amendment. Other plans may well be considered as alternatives,” he said in a statement. “Significant questions remain to be answered about the Protocol’s implementation. The Judicial Council will need to rule on its constitutionality. The feasibility of its financial provisions must also be evaluated.”

Bickerton said it is unclear how many members will be lost if the proposal moves forward. “I am sure we will lose a certain percentage. We anticipate that,” he said. “It’s time for us to get back to the ministry and mission of the church.”