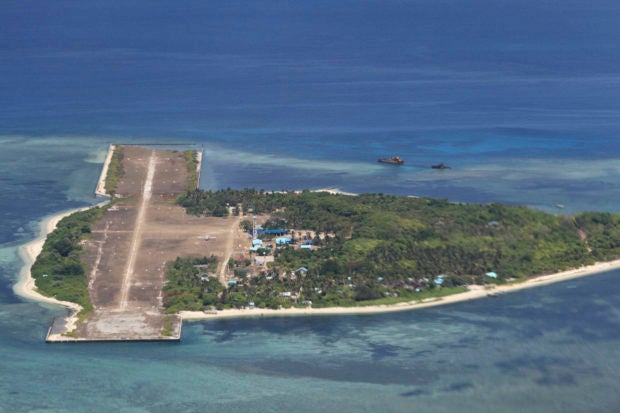 TAKING LONGER THAN PLANNED The Philippine Navy has commissioned a private contractor to build the beaching ramp on Pag-asa, as the Philippine government prepares to undertake improvements on the island’s unpaved 1,300-meter airstrip. —PHOTO COURTESY OF THE ARMED FORCES OF THE PHILIPPINES

MANILA, Philippines — Delays have yet again hampered the construction of the beaching ramp on the Philippines’ biggest island outpost in the West Philippine Sea, which Defense Secretary Delfin Lorenzana said will not be completed before year-end.

In a Viber message to reporters on Friday, Lorenzana said bad weather on Pag-asa Island caused the breakdown of construction equipment.

“Because of bad weather, it is difficult to transport materials from Puerto Princesa (Palawan province). Second, when an equipment bogs down it takes time to have it repaired,” the defense chief said.

The Philippine Navy has commissioned a private contractor to build the beaching ramp on Pag-asa, as the Philippine government prepares to  undertake improvements on the island’s unpaved 1,300-meter airstrip. The 37-hectare Pagasa Island is the biggest of eight “features,” according to Lorenzana, occupied by the Philippines in the West Philippine Sea—an area over which China and the Philippines remain in dispute despite a 2016 arbitral ruling in the latter’s favor.

The defense department set the initial target date of completion at the end of 2018. Then Lorenzana said last July the ramp will be completed by the end of this year.

He blamed bad weather for the delay. “While these instances were factored in during the planning of the construction, we did not anticipate their severity,” Lorenzana said in his Viber message.

“We will try to expedite the beaching ramp’s completion because the rehab of the runway is dependent on it,” he added.

Citing updates by Commodore Renato David, commander of the Naval Forces West, Lorenzana dismissed reports that the delay was caused by the pullout of the contractor.

Lorenzana had earlier said the project is 71-percent complete, with a total of 17 workers on board.

The Asia Maritime Transparency Initiative (Amti), a Washington-based think tank that has been monitoring the dispute over the West Philippine Sea, had earlier pointed out an increase in Chinese activity in the South China Sea, amid the Philippine construction activities on Pag-asa Island which began in 2017.

“More heavily armed vessels like the Zhaoduan and Zhaojun class, both of which have a 76mm cannon, have also patrolled these areas but are more frequently seen in larger deployments, such as those currently occurring off the Vietnamese coast or around Philippine-held Thitu (Pag-asa) Island starting in December 2018,” Amti said in a Sept. 26. post on its website, amti.csis.org.