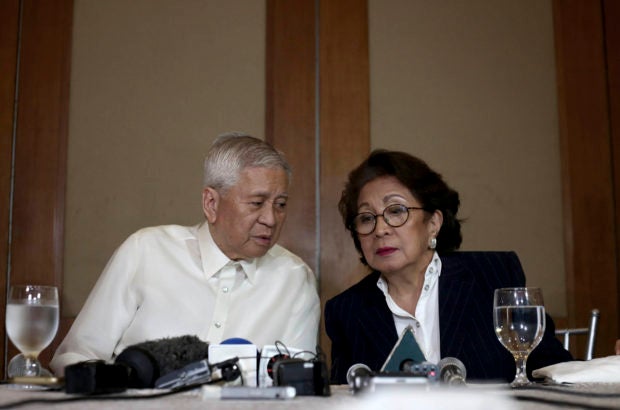 MANILA, Philippines — Former Foreign Secretary Albert del Rosario and ex-Ombudsman Conchita Carpio Morales on Friday said the chief prosecutor of the International Criminal Court (ICC) did not completely reject the complaint they had filed against President Xi Jinping and other Chinese leaders for alleged crimes against humanity committed against Filipinos in the West Philippine Sea.

Their complaint, technically called a communication under the Rome Statute that created the ICC, alleged that Filipinos, including hundreds of thousands of Filipino fishermen, were “persecuted and injured” by China’s aggressive island-building and occupation in the West Philippine Sea, waters within the country’s 370-kilometer exclusive economic zone (EEZ) in the South China Sea.

“The ICC prosecutor did not dismiss our communication. The prosecutor welcomes ‘new facts and evidence’ to proceed with the case and we are providing them. This has only strengthened our resolve,” Del Rosario and Morales said in a joint statement.

“Let them (Chinese leaders) gloat in the meantime. This is just the beginning. Abangan (Just wait),” Morales added in a brief, separate statement.

The former officials declined to elaborate on their statement.

Locsin: ‘I told you’

“There you go. I told you, you can file anything, even [a] leave of absence,” he said on Twitter.

In a report that included the Philippine case, ICC Prosecutor Fatou Bensouda said the tribunal did not have jurisdiction over the alleged actions of Xi and other Chinese officials as they had taken place in the Philippines’ EEZ, which is not part of the country’s territory.

Bensouda also noted that the respondents in the communication were officials of China which is not a signatory to the Rome treaty.

Likewise, the crimes alleged by Del Rosario and Morales were committed on Chinese-registered vessels where the ICC also did not have jurisdiction, she said in the report published on Thursday on the ICC website.

“Accordingly, the Office [of the Prosecutor] concluded that the crimes allegedly committed do not fall within the territorial or otherwise personal jurisdiction of the Court,” she said.

Del Rosario and Morales filed their complaint on March 15, 2018, two days before Philippine government, on orders of President Duterte, withdrew from the Rome Statute, alleging that the court and its prosecutor had prejudged a separate case in which he and other officials were accused of committing crimes against humanity in his war on drugs.

“In implementing China’s systematic plan to take over the South China Sea, President Xi Jinping and other Chinese officials have committed crimes within the jurisdiction of the court, which involve massive, near permanent and devastating environmental damage across nations,” the two former officials said in their communication.

“The situation presented is both unique and relevant in that it presents one of the most massive, near permanent and devastating destruction of the environment in humanity’s history, which has not only adversely affected and injured myriad groups of vulnerable fishermen, but present and future generations of people across nations,” they said.

“This has seriously undermined the food and energy security of the coastal states in the South China Sea, including the Philippines,” they added, referring to massive land reclamation to build the artificial islands on top of thriving reefs in the South China Sea that were the Filipinos’ traditional fishing grounds.