MANILA, Philippines – China’s newly-appointed ambassador to the Philippines, Huang Xilian, in a speech upon his arrival in Manila on Tuesday said “the best is yet to come” and vowed to continuously advance ties between the two Asian nations. 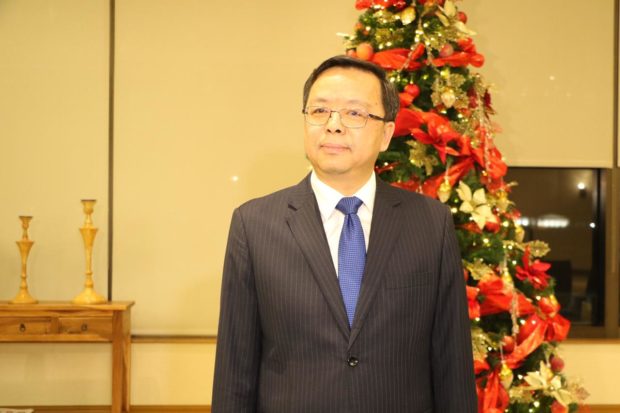 “I feel extremely honored to serve as the Chinese Ambassador to the Philippines at such an important historical juncture, and will work wholeheartedly to promote China-Philippines friendship and cooperation, living up to the significant mission entrusted upon me,” Huang said.

Huang replaced Zhao Jinhua who started his five-year stint as ambassador to Manila in 2014 at the height of a maritime dispute between the Philippines and China over the South China Sea.

Zhao’s duty as Chinese ambassador to the Philippines came to a close as Manila and Beijing forged warmer ties under the Duterte administration.

The new Chinese envoy’s assignment to the Philippines, meanwhile, coincided with the upcoming 45th anniversary of the establishment of the diplomatic relations between Manila and Beijing.

“Let’s join with each other to embrace the present moment and open up the future,” Huang stated.

“I look forward to working together with my colleagues and friends to continuously advance the China-Philippines relationship of comprehensive strategic cooperation,” he added.

Huang also said that the Philippines is an “important partner” of China in jointly building the Belt and Road.

“China stands as the Philippines’ top trading partner, the largest source of import, the third largest export market and the second largest tourist origin,” he added.

He likewise pointed out that the growth of diplomatic ties between the two Asian countries “has been generating more and more tangible benefits for the people and brought about a closer China-Philippines community of shared future.”

Huang also expressed astonishment over the accomplishments of the Philippines.

“I have every reason to believe and expect that the country will achieve greater strength and prosperity in the coming years and decades,” he said.

China’s new top diplomat in the Philippines also said that Manila and Beijing “enjoy a time honored friendship” as it ushers in “a fresh Golden Age for the two countries” under its current leadership.

Huang added that he has a “natural affinity” with the Philippines.

“I was born in Fujian province of China. Since I was a little child, my families have kept telling me that the Philippines which faces China across the sea is our relative with close kinship and cultural bond,” he said.

He said he has long been working on Asian affairs in his diplomatic career and has had “the privilege to learn more about the Philippines and pay official visits to this country known as ‘a paradise on the earth’.”

“I have always been deeply impressed by its magnificent natural beauty, hospitable people, diverse culture and enormous development potential,” he added.