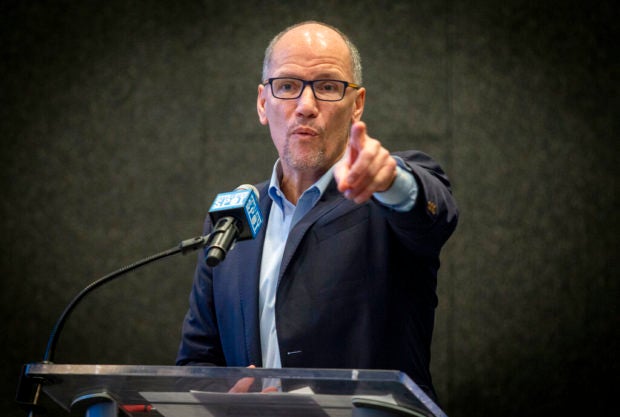 Tom Perez, chair of the Democratic National Committee, addresses the audience during a speech in Atlanta. The DNC has approved a plan in Nevada to offer caucus materials in Tagalog for the state’s growing Filipino-American population. (AP)

LAS VEGAS — The Democratic National Committee has approved a plan by Nevada Democrats to offer caucus materials in Tagalog for the state’s growing Filipino-American population.

At the same time, Nevada’s plan will offer the first-ever early voting option for presidential caucuses, a change stemming from a push to make the in-person presidential nominating meetings more accessible.

The state party’s chairman, William McCurdy II, and the DNC chairman, Tom Perez, intend to hold a conference call on Monday to announce the approval of the plan, the party confirmed.

“The primary goal in crafting this plan was to ensure as many Nevada Democrats as possible are given the opportunity to make their voice heard and I believe we will do that in 2020,” McCurdy said in a statement. “Nevada plays a critical role in the presidential primary and we take our role as an early state incredibly serious.”

The shift in Nevada, which votes third in the Democratic presidential primary, comes as Democrats have been encouraging state parties to find ways to increase participation in caucuses or instead hold primaries.

Traditional caucuses require voters show up in person at neighborhood sites at a specific time and break into groups to demonstrate their support for their chosen candidate. Critics have said the format is difficult for people to participate in, especially if they’re homebound, have to work or have young children.

To allow for an alternate way to participate, Nevada and fellow early voting state Iowa had sought earlier this year to allow people to vote in their 2020 caucuses over the telephone. But DNC officials rejected the plan in August, citing security concerns.

Nevada is instead relying on four days of early voting to boost turnout, running Feb. 15-18. The early results will be kept confidential until vote totals are released from the state’s main caucuses on Feb. 22.

The early voting will be an abbreviated version of the in-person meetings, allowing Democrats to stop by caucus sites and fill out forms listing their preferred candidate and up to four alternatives.

It’s unclear whether campaigns will try to encourage early caucusing to lock in support sooner, but the changes likely will force the candidates to spread their intense get-out-the-vote push into multiple days.

The DNC also has signed off on Nevada Democrats’ plan to have workers running the caucus meetings use an app to tabulate results, determine if a candidate has enough support and calculate how many delegates they’ve earned. The app will report the results to the Nevada State Democratic Party.

In past years, results were recorded by hand on paper and transmitted to the party headquarters via telephone and mail.

The party plans to release more information about the app in the coming weeks.