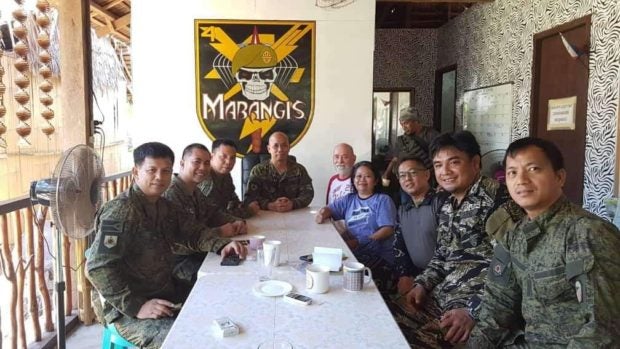 MANILA, Philippines —Soldiers from the Army’s 2nd Special Forces Battalion have rescued a kidnapped British national and his wife, more than a month after they were abducted by armed men believed to be from the Abu Sayyaf group.

Soldiers recovered businessman Allan Arthur Hyrons and his wife, Welma Paglinawan-Hyrons around 8:30 a.m. after a firefight with Abu Sayyaf gunmen along the border villages of Silangkan and Taha in the town of Parang, Sulu, regional military commander Lt. Gen. Cirilito Sobejana said.

Sobejana did not provide more details except that the couple were already in the hands of government troops.

“Their health conditions are okay but I need to have them checked with our doctors to make sure,” the official of the Western Mindanao Command said.

Sobejana said the rescue of the couple was a result of three days of intensified military operations. Seven members of the Abu Sayyaf were killed in separate encounters with the Army over the weekend, including a suspected liaison of the Islamic State to the Abu Sayyaf Group, Talha Jumsah or “Abu Talha.”

“We pursued, we did a hot pursuit so it’s a convergence of efforts among our forces on the ground,” Sobejana said.

A 10-minute running gunbattle between the bandits and soldiers took place before the British-Filipino couple were secured by government troops.

“This is has a major impact on our efforts and it will cause a huge setback on our enemies. This is a big blow to their morale. We can see they are demoralized so we need to take advantage of this,” Sobejana said.

The Hyrons were kidnapped in their beach resort in Brgy. Alindahaw in Tukuran, Zamboanga del Sur last October 4.

The couple will undergo medical examination and custodial debriefing in Jolo.

Read Next
South Korea may introduce visa-free policy for Filipinos, says envoy
EDITORS' PICK
Omicron variant detected in more countries as scientists race to find answers
Gov’t plans to open COVID-19 vaccination for 5- to 11-yr-olds by January 2022
A delightful blessing!
Villar Group gears up for AllValue Shopping Party on Dec. 3; around P 1-million promos and discounts up for grabs
Legarda: Ending Violence Against Women, a cause for all
Gov’t eyeing COVID-19 vaccine booster for essential workers, indigents by Dec. 10
MOST READ
Quiboloy warns of ‘much worse than Omicron virus’ if his ‘persecution’ is not stopped
Marcoleta defends pol ads on ABS-CBN
MMDA: Number coding during afternoon rush hours back this week
PH updates ‘red list,’ travel ban imposed on 7 more countries
Don't miss out on the latest news and information.