globalnation /
DUTERTE OFF TO BUSAN FOR SUMMIT 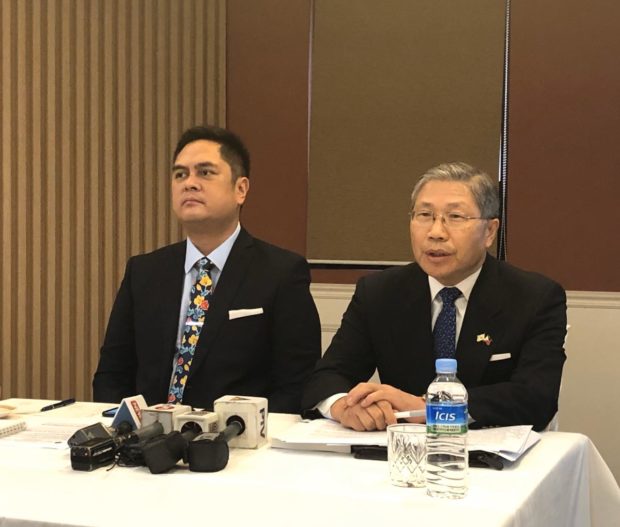 BUSAN — South Korea may extend visa-free privileges to Filipinos once steps are taken to reduce the estimated 15,000 “illegal” Filipinos living in the country, according to the South Korean ambassador to Manila.

“We hope in the near future we can have a [visa-free] policy between Korea and the Philippines but, so far, there are certain numbers of illegal Filipinos in Korea,” Han Dong-man told visiting Filipino reporters here on Sunday.

Han said there were 15,000 undocumented Filipinos living or working in South Korea, a number that was “increasing.”

President Rodrigo Duterte was scheduled to arrive in this southern port city on Sunday to attend the 2019 Association of Southeast Asian Nations (Asean)-Republic of Korea Commemorative Summit, which would be held on Monday and Tuesday.

Philippine and South Korean officials are expected to sign on the sidelines of the summit an agreement to continue discussing a free-trade deal next year.

Earlier on Sunday, Noe Wong, the Philippine ambassador to South Korea, said the Philippines was trying to negotiate a reciprocal visa deal for Filipinos to rectify the “imbalance” in visitor exchanges between the two countries.

“We are trying to raise that issue on a quid pro quo [basis] because almost every time Filipinos come here, we need to get a visa,” he told a separate briefing.

Wong said there had been informal discussions about a reciprocal agreement between Manila and Seoul on visa-free privileges.

Koreans are the top tourist arrivals in the Philippines and they do not need visas for visits shorter than 30 days. The Department of Tourism aims to draw 2 million Korean visitors by the end of 2019.

But Filipinos need to obtain visas to visit South Korea under a stringent application process that may take up more than a month.

“It’s just that I saw the, shall we say, inequality. I don’t know if the term is right, because there’s no need for visa for them to go [to the Philippines] on a specific time,” Wong said.

“And in fact, I hear so many complaints about the length of time now to get a visa from the South Korean Embassy, right? From 15 days to 30 days to even 45 days now,” he said.

Wong said he was unaware if the matter would be discussed during Mr. Duterte’s bilateral meeting with South Korean President Moon Jae-in on Monday.

Han said his government might introduce a visa-free policy for Philippine passport holders if the number of undocumented Filipinos could be reduced, citing South Korea’s experience with its visa waiver program with another Southeast Asian country, Thailand.

“Accordingly there are many, many Thai people staying illegally [in South Korea],” he said.

“That’s why our basic policy is instead, if the Philippines decreases [the number of illegal people], naturally you can have [visa-free] policy,” Han said.

The South Korean Embassy in Manila is working to simplify the visa application process for Filipinos, he added.

“There are many delays in issuing visa, so I asked my staff in charge of visa to facilitate, to simplify the visa documents, so more Filipinos will be able to visit Korea,” he said.

“But every day we receive 1,500 applications. We will try to bring more steps … to facilitate the visa process,” he said.

In a separate briefing, Presidential Communications Secretary Martin Andanar said Mr. Duterte would press for a peaceful resolution of the Korean conflict during the summit.

“[The President] has repeatedly said that he does not want to have a conflict [on] the Korean Peninsula. We’re talking here of nuclear arms and nuclear power. . .We are so close to South Korea,” Andanar said.

Andanar said he could not say what exactly Mr. Duterte would raise during the summit, but definitely “he will advance the interest of [the] Filipino people, and that includes regional security.”

Democratic South Korea and communist North Korea are technically still at war. The Korean War, which broke out in 1950, ended in 1953 with an armistice and not with a peace agreement.