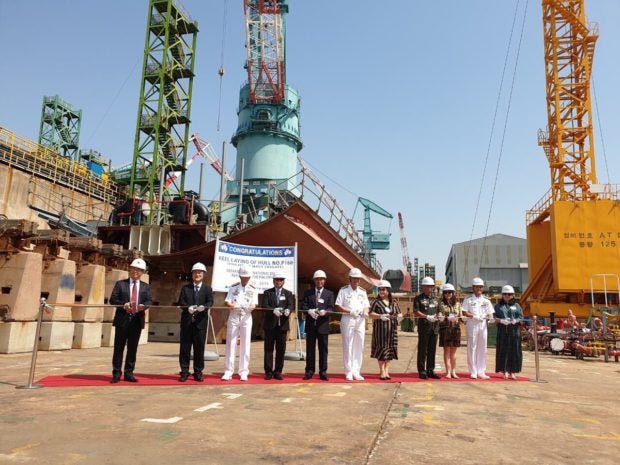 Navy chief Vice Adm. Robert Empedrad said a ceremony will be held at the Hyundai Heavy Industries (HHI) shipyard in Ulsan, South Korea. He will attend the ship launch along with Armed Forces chief Gen. Noel Clement and other ranking military officials.

The event comes six months after the keel laying of BRP Antonio Luna and the ship launch of BRP Jose Rizal (FF-150). The Philippine government signed a deal with HHI to buy the two frigates for P16 billion in 2016.

The delivery of the ships is expected to start in 2020.

Empedrad said some of the future crew members of BRP Jose Rizal who do not need to undergo training like the cooking staff and admin will travel to South Korea to witness Friday’s event so they can see the ship firsthand.

Most of the future crew of BRP Jose Rizal are now training in South Korea, he added.

The two frigates were designed based on the Incheon/FFX-I/HDF-3000-type multi-purpose frigate of the Republic of Korea Navy. It will be armed with Oto Melara 76mm super rapid gun and SMASH 30mm remote-controlled established naval gun.

The ships will be fully equipped with surface-to-air and surface-to-surface missiles, torpedoes, launchers and weapon systems for four-dimensional warfare.

Each vessel is capable to carry more than a hundred officers and crew. It also features a flight deck towards the stern with the ability to handle one maritime helicopter weighing up to 12t. A hangar will also be fitted to accommodate the helicopter.

It will also be equipped with two rigid-hulled inflatable boats for military and emergency operations at sea.

The two ships will have a maximum speed of 25 knots, with a range of 4,500 nautical miles at cruising speed of 15 knots. It can sustain an operational presence for 30 days. /kga