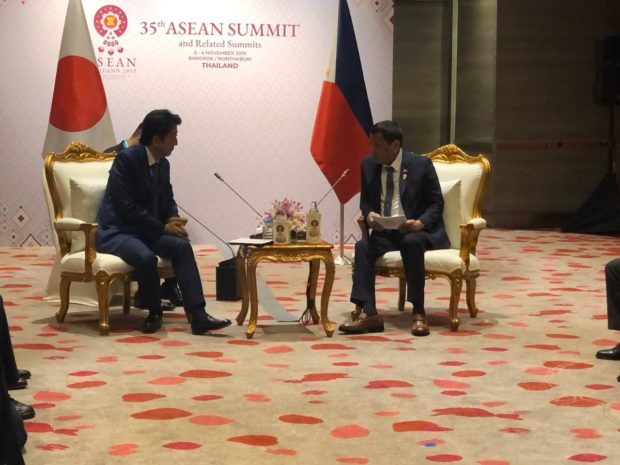 NONTHABURI, Thailand — President Rodrigo Duterte has expressed “regret” to Japanese Prime Minister Shinzo Abe for cutting short his trip to Japan in October “to attend to some pressing matters back home.”

“Your Excellency, let me start the talks by giving you and your countrymen that it was my honor to be there during the enthronement of the Emperor,” Duterte said Monday in his opening remarks  during their bilateral meeting with Abe on the sideline of the 35th Association of Southeast Asian Nations (Asean) Summit.

“I regret that I had to go first. I had to cut short. I was not able to attend your Gala Dinner because I had to attend to some pressing matters back home,” he added.

But the President went home earlier than expected from Japan, where he attended the enthronement of Emperor Naruhito, after complaining of an “unbearable pain” in his lower back.

READ: Duterte to clip Japan trip ‘due to unbearable pain’ from motorbike accident

A week prior to his Japan trip, Duterte fell off a motorcycle. The Palace said the incident was just a minor mishap, and that the President only sustained “slight bruises” from it.

Abe, meanwhile, said he was grateful for Duterte’s participation and understood why Duterte had to go back to the Philippines.

“As I mentioned, with regard to the ceremony of the enthronement at the Seiden State Hall in Japan, that was an extremely important occasion for Japan and the Japanese people,” Abe told Duterte.

“And I am truly grateful for Mr. President’s participation in the ceremony and also I understand that because of the pressing issues that you had to go back to the Philippines. You have to shorten your visit,” he added.

The President was represented by his daughter Davao City Mayor Sara Duterte-Carpio at the banquet for Emperor Naruhito.