With Apec canceled, focus is now on Asean Summit 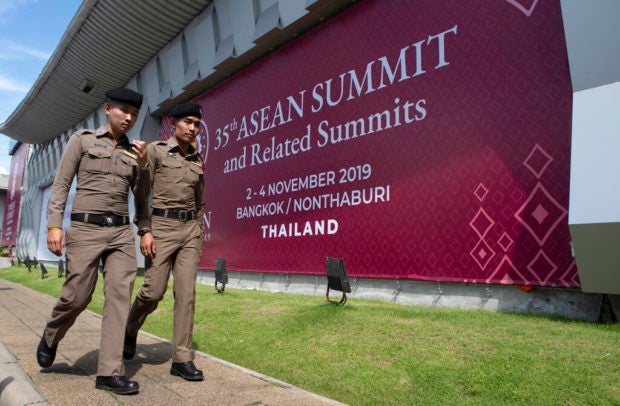 In this Tuesday, Oct. 29, 2019. Thai policemen walk in front of a banner welcoming Association of Southeast Asian Nations at the venue of The 35th annual Association of Southeast Asian Nations (ASEAN) in Nonthaburi province, Thailand. U.S. national security adviser Robert C. O’Brien and Commerce Secretary Wilbur Ross will represent President Donald Trump at two regional summits in Thailand this weekend, the White House announced, a move that would widely be viewed in the region as a snub. (AP Photo/Sakchai Lalit)

BANGKOK — With the Apec (Asia-Pacific Economic Cooperation) summit in Chile canceled, global attention will be on the 35th Asean Summit taking place here from this weekend.

This annual gathering, hosted by Asean countries on a rotation basis, is attended by world leaders from Australia, China, India, Japan, Russia, South Korea and their Asean counterparts.

The absence of US President Donald Trump at this summit is already viewed as a snub to the region.

This is the second time Trump skipped the summit after Singapore last year.

It was reported yesterday that Canadian Prime Minister Justin Trudeau, a regular face at the Asean summits, has informed host Thailand that he is unable to attend.

Thai newspaper, The Nation, reported that Trudeau who was re-elected last week had called Prime Minister Prayut Chan-o-cha to say that he was busy shaping up his government following his recent election for a second term.

Prime Minister Tun Dr Mahathir Mohamad will be joining his Asean counterparts for the summit which begins tomorrow.

A series of meetings have been slated to take place, including the Asean-China summit, Asean-India summit, East Asia Summit (with China, Japan and South Korea) and Asean-Japan summit.

The RCEP, covering a third of the global economy, has missed several deadlines to wrap up negotiations which started in 2012.

The trade pact covers a population of 3.4 billion with a total gross domestic product (GDP) of US$49.5 trillion, or about 39% of the world’s GDP.

Hopes are high that officials and ministers are able to conclude their negotiations for the leaders to announce an agreement when they meet.

Dr Mahathir is also expected to hold bilateral meetings with Australian Prime Minister Scott Morrison and his Thai counterpart on the sidelines of the summit.

Chile had cancelled the Apec summit scheduled for Nov 16 and 17 due to violent protests.

In a separate statement, Dr Mahathir said Malaysia as host of Apec 2020 appreciated the hard work and leadership Chile has demonstrated throughout this year.

“As the incoming Apec chair and host, Malaysia offers its utmost support to Chile in preserving all the achievements made thus far in 2019 and materialising deliverables which have been targeted to be achieved this year.

“In this spirit, we look forward to working together with Chile and other economies in preserving the achievements and completing those remaining works for 2019.

“Malaysia fully understands the decision by President Sebastian Pinera given the efforts and resources Chile has invested for its hosting year.

“We agree that putting people’s interests and addressing their concerns remains a top priority for the government of Chile. We pray that stability will be restored in Chile soon, ” he said.

Dr Mahathir also said in the current global situation, there were increasing challenges faced by economics in addressing societal discontents, leading to the need to find a balance in pursuing domestic and regional economic growth.

“Hence, Malaysia believes that Apec not only remains relevant and important but also has a bigger role as a vehicle for economies to work together and find solutions to the issues.

“Apec’s work in pursuing the Regional Economic Integration and charting the way forward is now more important than ever, ” he said.

Read Next
US official urges ASEAN to stand up to China in sea row
EDITORS' PICK
House to probe Facebook takedown of gov’t accounts
Despite toll, never too late to fight pandemic—WHO chief
Water remains our saving grace right now
Feud is over: Velasco next Speaker on Oct. 14
Smart poised to turn PH into ‘Smart 5G country’ with nationwide rollout
Get 80% OFF Ignite 2020 Cyber Tickets starting 28 September
MOST READ
Velasco to take over as Speaker on Oct. 14
2 PDP-Laban allies in House jump over to Lakas-CMD
LOOK: The Mountain from ‘Game of Thrones’ welcomes first son with wife
Gun attack in PMA: Air Force man killed, 2 others wounded
Don't miss out on the latest news and information.