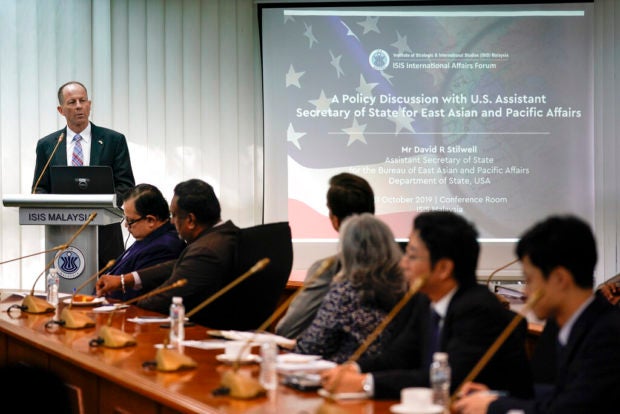 KUALA LUMPUR, Malaysia  — A senior U.S. official on Thursday urged Southeast Asian nations meeting this weekend in Bangkok to put up a stiffer resistance to China’s militarization of the disputed South China Sea.

At the same time, David Stilwell, the U.S. assistant secretary of state for East Asia and the Pacific, sought to downplay Chinese concerns over U.S. involvement in the region.

He told a forum in Malaysia that the concept of a free and open Indo-Pacific region was not a move to expand U.S. domination but reflected Washington’s “enduring engagement” to make the area prosperous.

China’s smaller neighbors including Vietnam, the Philippines and Malaysia contest Beijing’s claims of ownership of almost all of the strategically important South China Sea. Beijing has asserted its claim by building seven man-made islands and equipping them with military runways, missile defense systems and outposts.

Stilwell, who is en route to Bangkok for regional summits with the 10-member Association of Southeast Asian Nations, said the grouping should have resisted moves to militarize the South China Sea.

“This is your turf, this is your place. Vietnam has done a good job of pushing back. I would think that regarding Asean centrality … (the grouping) would join Vietnam to resist actions that are destabilizing and effecting security,” he said.

Stilwell acknowledged that the bloc doesn’t want to have to take sides between the two superpowers.

“I ask my Asean counterparts what their alternate plan was in this world where we like not to have to choose. I think the U.S. has done a great job in standing up at great political cost to ourselves,” he added.

The South China Sea territorial row is expected to again be a potential source of friction at the meetings in Bangkok this weekend. Asean has been unable to forge a strong stance on the issue due to objection from China’s allies such as Cambodia.

The White House announced earlier that U.S. national security adviser Robert C. O’Brien and Commerce Secretary Wilbur Ross will represent President Donald Trump at the two regional summits. Such a move is likely to be viewed in Southeast Asia as sign of a lack of engagement in the region at a time when China’s influence and investments are quickly growing.

Stilwell said a code of conduct being negotiated between China and Asean to govern the disputed seas should comply with the U.N. Convention on the Law of the Sea to protect countries’ economic interests and ensure “orderly movement in the use of the oceans.”

Even though the U.S. has not ratified the law, he said “we do comply and we enforce it.”

“The United States has a simple position on the South China Sea – the rights of all nations must be respected, regardless of size, power, or military capabilities,” he added.

Stilwell said that “without security, you can’t have trade” and prosperity is impossible. But he added that the U.S. “has never and never will seek domination in the Indo-Pacific, and we will oppose any country that does.”

“There has to be a security element. Nobody is better suited to it than the U.S. mostly because we include others in that security apparatus in terms of allies and partners. The fact that they are like-minded is reinforcing and tells us that we are doing something right,” he said.

Read Next
Asean asked to do more to resolve SCS dispute
EDITORS' PICK
‘Opportunity’: PH senior population on the rise
Powered by style, innovation and passion
House starts inquiry into sugar import mess
Pimentel: Gov’t buyers knew of cheaper laptops but still got expensive ones
A laptop that maximizes your WiFi so you can maximize your productivity
House energy committee chair Arroyo bats for cheap electricity
MOST READ
Imee Marcos bares illegal importation of white onions
U.S. actor Anne Heche is taken off life support 9 days after car crash and dies
PVL: Celine Domingo gets big surprise as Creamline’s Finals MVP
Pimentel: PS-DBM knew of cheaper laptops but still got expensive ones
Don't miss out on the latest news and information.