Duterte thanks India for help in Marawi rehab | Global News

Duterte thanks India for help in Marawi rehab 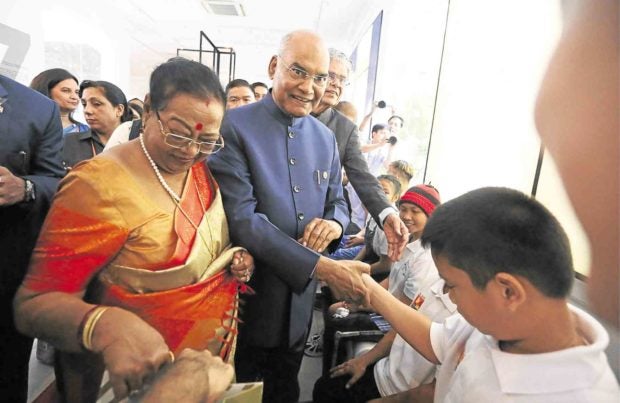 MADE IN INDIA Indian President Ram Nath Kovind meets 120 amputees fitted with prosthetic limbs at the UP PGH. The free prosthetics were donated by Mahaveer Philippine Foundation. —MARIANNE BERMUDEZ

The President made the remarks during the state banquet he hosted on Friday for Kovind, who is in the country for a five-day state visit.

“Allow me, Excellency, to take this occasion to thank you, a great nation for your unswerving support to my country. Whether it be in rebuilding Marawi or international arena [when] our sovereignty is challenged—India was with the Philippines,” the President said.

India had pledged $500,000 for the rehabilitation and rebuilding efforts for Marawi, which was devastated by heavy fighting between Islamic State sympathizers and state forces.

The President also commended India for adhering to international law, and said Manila holds it in high regard for being the world’s largest democracy and one of the fastest-growing economies.

“Excellency, your country has shown to us that nation-building means embracing diversity and staying true to one’s heritage, while welcoming change and adapting to the realities of the present,” he added.

He urged stronger ties with India, with which the Philippines is marking 70 years of diplomatic relations this year.

“Indeed, seven decades [on], our [amity] and partnership remain strong and enduring with [infinite] possibilities for further growth and expansion,” he said.

He noted that the two countries have strengthened their commitment to put in place vibrant and multifaceted ties.

“I have no doubt that we will succeed in this noble endeavor,” he added.

The Philippines and India face common challenges and also have a long history of contacts and friendship, he said.

“Indian blood runs in the veins of over a million of our countrymen. Words of Sanskrit origin fill our lexicon. And the Indian influence persists in our arts and, perhaps, even in our world view,” he said.

And their partnership remains strong, and could grow and expand, he said.

“From the economic to the political-security spheres, the destinies of our two nations are intimately linked. For we belong to one region immutably connected by the vast expanse of the Pacific and Indian Oceans,” he said.

Kovind, for his part, also said there was a rich shared heritage between the Philippines and India, which has to be researched and documented.

“The discovery of the statue of Tara in Agusan and the commonality in our languages and art speak of vibrant cultural exchanges in the ancient past,” said the visiting Indian president.

“And much to our delight, our contemporary cultural attributes — be it music or dance, karaoke, our Kathak — continue to bring our two peoples together,” he added.