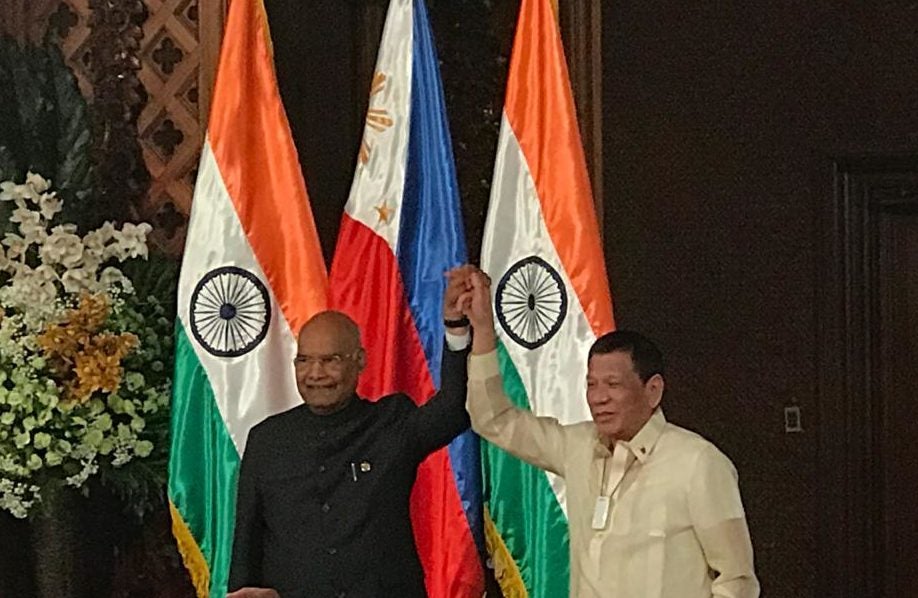 The 74-year-old Indian head of state arrived in the Palace around 3:30 p.m. where he was welcomed by Duterte and several Cabinet members.

The welcome ceremony for Kovind at Kalayaan Grounds inside Malacañang, however, was canceled due to inclement weather.

“We are certain that President Kovind felt the world-famous warmth and genuine hospitality of the Filipino people from the schoolchildren and government officials that greeted him on his way to Malacañang,” presidential spokesperson Salvador Panelo said in a statement.

Kovind is on a five-day state visit to Manila to commemorate the 70th year of relations between India and the Philippines.

“We note that bilateral trade between the two countries stands at US$2.32 billion and has been increasing. The amount of estimated Indian investments in the Philippines is valued at more than US$900 million. India has a strong presence in Pharma (Generics), and its collaboration in the BPO sector in the country has grown exponentially,” Panelo said.

Duterte and Kovind will hold a bilateral meeting to discuss political, economic, cultural and people-to-people engagement between the two countries.

The Indian leader is expected to meet beneficiaries of the Mahaveer Philippine Foundation, Inc., a Manila-based nongovernment organization which provides free prosthetic limbs made by India to Filipino amputees.

Kovind is also set to grace the Philippine-India Business Conclave and the fourth Asean-India business summit.

His last stop in Manila is to meet with the Indian community in the Philippines. /je