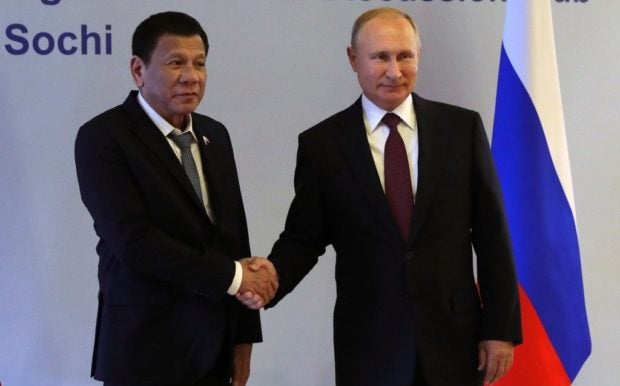 Russian President Vladimir Putin (right) shakes hands with Philippine President Rodrigo Duterte prior to their meeting at the Valdai Discussion Club in Sochi on Oct. 3, 2019. (Photo by Mikhail Klimentyev / Sputnik via AFP)

MANILA, Philippines — President Rodrigo Duterte would want to first look into the proposal for the Philippines to explore with Russia the possibility of putting up nuclear power plants here.

According to the Department of Energy (DOE), the Memorandum of Intent that was signed on Oct. 4 was only a “framework for discussion and not for a particular construction of a small modular reactor.”

“The President wanted to study first the proposal,” Panelo said.

The memorandum was signed by Cusi and Evgeny Pakermanov of Rusatom Overseas during President Duterte’s visit to Moscow, Russia.

Under the memorandum, the Philippines and the Russian firm expressed “intention to jointly explore the prospects of cooperation in the construction of nuclear power plants in the Philippines.”

In a Senate hearing on the proposed 2020 budget of the DOE, Cusi said the department was just looking for alternative sources of energy.