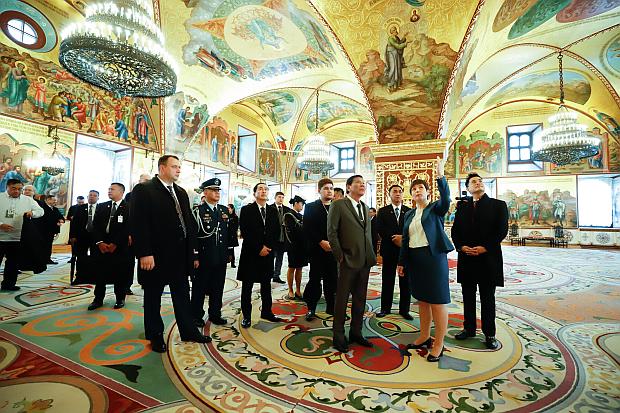 MOSCOW, Russia — President Rodrigo Duterte pleaded with the Filipino community here to abide by Russia’s laws as he assured overstaying Filipinos that the government is working on legitimizing their stay in Russia.

Duterte was on a five-day official visit to Russia where he met with his counterpart, President Vladimir Putin, to discuss issues pertaining to economic, security, and labor cooperation among others.

“In the bilaterals…itong issue ngayon ng expired passport. ‘Yung expired passport ninyo, ipa-renew lang dito, wala nang problema,” Duterte said when he met with the Filipino community here on Saturday, his last official engagement before he flew back to the Philippines.

He touched upon the issue of overstaying Filipinos working in Russia and said that the Russian government, while aware of the situation, understands why Filipinos seek greener pastures abroad.

(Russia knows about those who overstay and hide from authorities. Russia has a very good government. It’s efficient; they know. But they said, “We won’t catch them. We know the problem, your plight; we know how hard it is in the Philippines.”)

“The most important thing to remember is that we are working with the blessings of President Putin and…maybe the parliament here. We’re working on a working visa or something to legitimize your stay,” he added.

Duterte, meanwhile, asked the Filipino community to abide by the laws of Russia.

(Just follow the law and we won’t have any problem. So all 10,000 of you shouldn’t have any criminal records or something.)

“You know, the criminal laws of Russia is very strict. Mas istrikto pa sa Pilipinas (They’re stricter than the Philippines’). So, kindly just…I’m pleading na huwag kayong gumawa (don’t disobey the law). Do not do anything that will jeopardize the relation at…maging masama ang tingin nila sa atin (their perception of us may be tainted),” he added.

According to Philippine Ambassador to Russia Carlos Sorreta, Putin, during his bilateral meeting with Duterte, agreed that there is a need for a labor pact between the two countries.

Sorreta was among those who joined Duterte during his bilateral meeting with Putin in Sochi on Thursday.

“Obey the laws. Follow the procedure. Tutal we are working on a sort of an agreement na mabigyan kayo ng maluwang na (that will give you leeway)…you’d be allowed to stay,” Duterte went on.

“Just be a law-abiding alien here…Do not break the laws. Comply with the requirements…So, kindly do not do anything na makasama ‘yung tingin nila sa atin. Maganda ang relasyon natin sa Russia. Maganda ang respeto nila sa atin (Don’t do anything that will taint our reputation. Our relations with Russia is good. They have respect for us),” he added.

There are currently 10,000 Filipinos working and living in Russia, but Sorreta earlier said that a “vast majority” are undocumented.

Most of the Filipinos in Russia, he added, typically work as nannies or household service workers. /je