Who are with President Duterte in Russia? 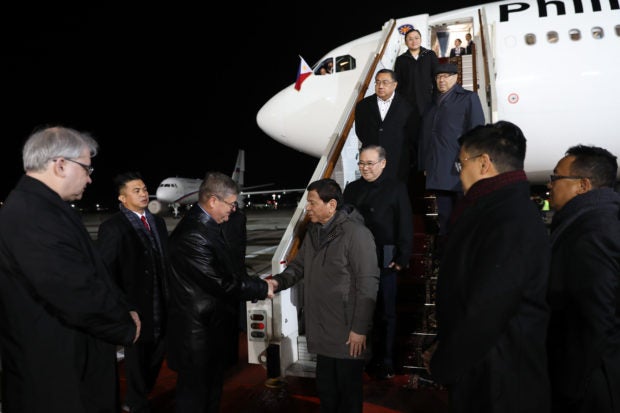 President Rodrigo Roa Duterte receives a warm welcome from the members of the reception party upon his arrival at the Vnukovo Military Base Airport in Moscow, Russian Federation on October 2, 2019. ALFRED FRIAS/PRESIDENTIAL PHOTO

SOCHI, RUSSIA—Who are with President Rodrigo Duterte in Russia?

Although Malacañang was tight-lipped about members of the presidential entourage, official or otherwise, some information still leaked through social media.

None of the President’s immediate family members joined him on the trip.

But Sen. Christopher “Bong’ Go, a former aide to the President, went along for the Chief Executive’s second official visit to Russia, which lasted from Wednesday to Sunday.

Go said he was invited by the Office of the President as a member of the Senate Committee on Foreign Relations.

He took part in every meeting, even high-level bilateral meetings between the President and select members of his Cabinet and their Russian counterparts.

A number of congressmen, political figures and show biz celebrities were also enjoying  autumn in Moscow.

He reportedly brought with him his wife and fellow Taguig representative, Lani Cayetano.

A group photo posted on Facebook on Thursday from Moscow showed that the next Speaker, Marinduque Rep. Lord Allan Velasco, was also in the Russian capital.

When asked, presidential spokesperson Salvador Panelo, who is also in Russia, said he did not know whether the congressmen were part of the official delegation.

He said the show biz celebrities as well as Gadon were not part of the official delegation and paid for their way and living expenses in Russia.

He also denied that the show biz celebrities would be paid a talent fee for entertaining the Filipino community when the President meets them on Saturday, his last official activity.

“As for the congressmen who are here, it’s the protocol [office] who can tell you whether they are part of the official delegation or they are here on their own,” Panelo said.

“With regard to the show biz [celebrities] who are here, as far as I know, when they entertain the Filipino community while waiting for the arrival of the President, they are not paid. They have been doing that during the presidential campaign. They just happen to be genuine and rabid fans of the President,” he said.

The President arrived in Sochi past 11 p.m. on Wednesday after a two-hour flight from Moscow, where he met with Russian Prime Minister Dmitry Medvedev and the chief executive officer of Rosneft Oil Co., Russia’s leading state oil company.

The President boarded the plane for Sochi six hours after arriving in Moscow from Manila on a trip that lasted 12 hours.

In an interview on Wednesday, Sorreta said the Philippine side proposed to let President Duterte and Russian President Vladimir Putin spend most of the allotted time for their bilateral meeting in Sochi for discussion rather than for ceremonial signing of agreements.