Duterte back in Moscow for rest of Russia trip 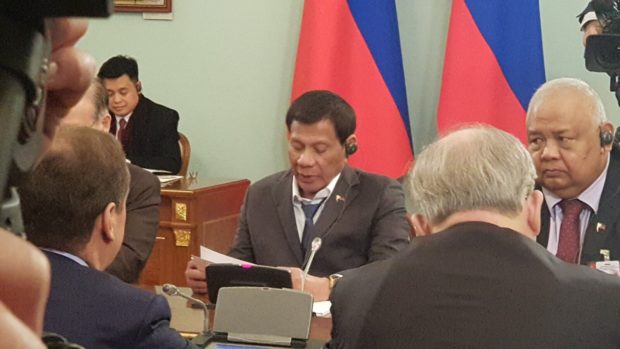 SOCHI, Russia — President Rodrigo Duterte returned to Moscow late Thursday (early Friday in Manila) where he would finish the rest of his scheduled activities in his five-day official visit to Russia.

Duterte’s plane touched down at Vnukovo Military Base Airport at around 12:20 am (5:20 am Manila time).

Prior to his arrival in Moscow, Duterte held a bilateral meeting with Russian President Vladimir Putin here where the former reaffirmed the Philippines’ strong commitment to build a robust and comprehensive partnership” with Russia.

“In the past two years, we have seen a dramatic increase in bilateral activities across many areas of cooperation at various levels of government,” Duterte told Putin.

In Moscow, the President is scheduled to lead a wreath-laying ceremony at the Tomb of the Unknown Soldier, a war memorial dedicated to the Soviet soldiers who perished during World War II.

He will then be given a tour of the Kremlin Palace and speak before a Philippines-Russia business forum afterward./ac