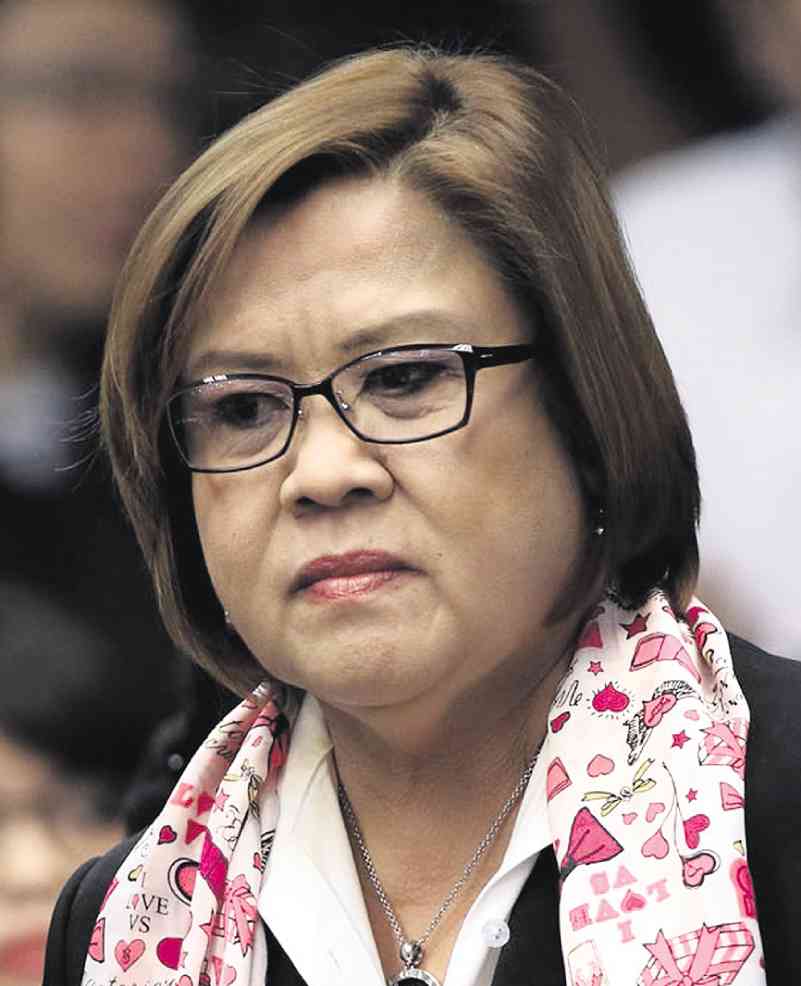 MANILA, Philippines — The “world is still watching,” Sen. Leila de Lima said on Saturday as she thanked the two US senators who proposed that Philippine officials involved in her detention be denied entry into the United States.

The US Senate appropriations committee on Thursday approved an amendment proposed by Democratic Senators Richard Durbin and Patrick Leahy to bar the entry on American soil by any Philippine official who had a hand in De Lima’s “politically motivated” imprisonment since February 2017 on President Rodrigo Duterte’s watch.

The amendment formed part of an appropriations bill on state and foreign operations, which will be tackled further by the entire US Senate and the US Congress.

De Lima is facing charges of conspiracy to commit illegal drug trade at Branches 205, 206 and 256 of the Muntinlupa Regional Trial Court.

Around 40 prosecution witnesses have testified against her, including former Bureau of Corrections officer in charge Rafael Ragos and Baguio Mayor Benjamin Magalong, who used to head the Criminal Investigation and Detection Group of the Philippine National Police.

A former chair of Commission on Human Rights who had been critical of the President’s brutal antidrug campaign, De Lima maintained that the drug charges against her were all fabrications and politically motivated.

In a statement on Saturday, the detained opposition senator said the congressional initiative by Durbin and Leahy was “a clear message that impunity, while remaining unchecked in our country, may find an end in the ‘home of the brave and the land of the free.’”

“Thank you, Senators Durbin and Leahy, and many other champions of justice and democracy, for reminding us that the world is still watching,” De Lima said.

One of De Lima’s allies in the Senate, Sen. Risa Hontiveros, also hailed Durbin and Leahy for their act of  “internationalism and solidarity in the face of human rights abuses.”

“[Their actions] are in fact the consequences of being part of the international community where countries, respective of each other’s sovereignty, help one another to uphold the principles of human rights and democracy,” Hontiveros said.

“This a stern warning to all those who rose to power in our country through killings and human rights abuses. The world is watching. And the world will act. There is a day of reckoning. Justice will eventually catch up with all of you,” she added.

“This is an affront to our sovereignty and to our ability to govern ourselves,” Sen. Bong Go, former special assistant to the President, said in a speech at Balangiga, Eastern Samar, on Saturday.

“I will suggest to President Duterte to also ban these senators from entering our country for interfering [in] our internal affairs,” Go said.

Senate President Vicente Sotto III, in a Viber message to reporters, said: “May I echo the sentiment that the time for the United States to pull strings attached to their offer of financial aid is long gone. Mentoring us in the ways of democracy and due process smacks of racism and superiority complex.”

In a radio interview, Sen. Richard Gordon suggested that the Philippine ambassador to the United States speak up on the matter.

“No self-respecting ambassador of the Philippines would allow that. He will intervene,” he said.

Jose Manuel Romualdez is the country’s top diplomat in Washington. —WITH REPORTS FROM JEROME ANING AND JOEY GABIETA