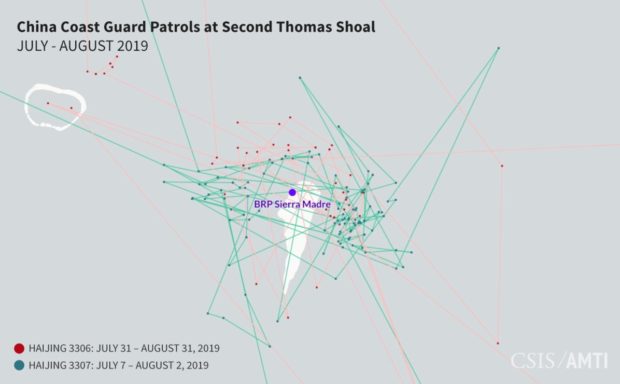 MANILA, Philippines — China Coast Guard (CCG) ships are purposely switching on its tracking signals for long periods of time in some areas claimed by the Philippines in the West Philippine Sea as part of its efforts to project power.

“There was at least one ship broadcasting from Luconia on 258 of the last 365 days. At least one was broadcasting at Second Thomas on 215 days, and from Scarborough for 162 days,” it said.

Ayungin Shoal is around 20 nautical miles from Panganiban (Mischief) Reef, one of the features occupied by China in the Kalayaan Island Group that it transformed into military outposts.

The Philippine Navy maintains its presence in Ayungin Shoal through BRP Sierra Madre, a transport ship intentionally grounded to serve as a military outpost.

The disputed Panatag shoal, a small ring of reefs, is located within the Philippines’ exclusive economic zone. China took control of the shoal in 2012 after a standoff, which later prompted the Philippines to file a case against China in the arbitration court.

Luconia Shoal near the southern tip of the Spratly Islands is being claimed by Malaysia.

While China frequently broadcasts its AIS in Panatag Shoal, it is not as consistent as it does in Ayungin and Luconia, likely because it is already in “firm control” of the shoal, the AMTI said.

Elsewhere in the South China Sea, the China Coast Guard often do not broadcast its AIS but only when entering and leaving port.

This could mean that China wants “to create a routine, highly visible Chinese presence at key sites over which Beijing claims sovereignty but does not have any permanent facilities.”

“It seems to be wagering that if it can maintain a semi-permanent CCG presence for long enough, regional states will eventually accede to its de facto control of those areas,” the AMTI concluded.  /muf