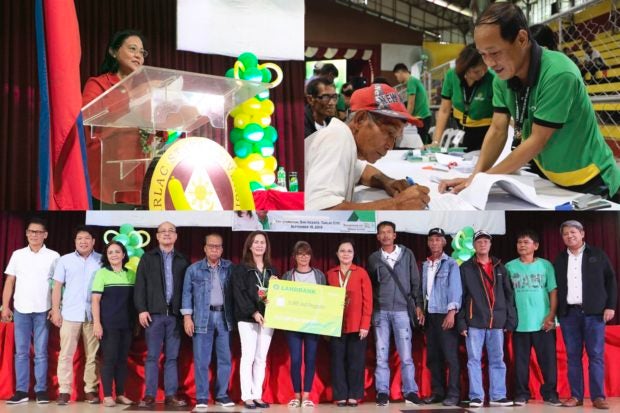 More than 1,000 rice farmers in the Province of Tarlac received a loan assistance of P15,000 each under the Expanded Survival and Recovery Assistance Program for Rice Farmers (SURE Aid Program) launched by the Department of Agriculture (DA) and Land Bank of the Philippines (LANDBANK) on September 18, 2019 in this city.

The P1.5-billion SURE Aid Program is government’s initial relief response to rice farmers who are tilling one hectare of land and below, and are affected by the initial impact of lower palay prices. The one-time, zero-interest, no collateral loan of P15,000 is payable up to eight years.

The Provincial Government of Tarlac will also shoulder the P50 fee for the notarization of the required documents.

“We should strive to be disciplined borrowers and pay the loans whichever way we can. As little as P5 per day should make a difference,” Governor Yap said to the farmers.

The SURE Aid Program intends to provide financial assistance to a total of 100,000 rice farmers nationwide, either directly or through accredited service conduits, including 99 year-old farmer Silvino Obligano who was one of the farmers to receive the assistance during the event.

During the event, LANDBANK distributed cash cards containing the P15,000 loan assistance to all qualified farmers, which they can use in the 10 existing automated teller machines (ATM) of the Bank within Tarlac City, plus a mobile ATM that was brought to the site by LANDBANK.

The Bank has earmarked P10 billion to fund the Program, with a low interest rate of two percent (2%) per annum.

“We know the hardships that our Filipino farmers are experiencing, including the decrease of palay prices in the market. This is why LANDBANK is further strengthening its collaboration with the Department of Agriculture in providing assistance to support your farming needs,” said Borromeo.