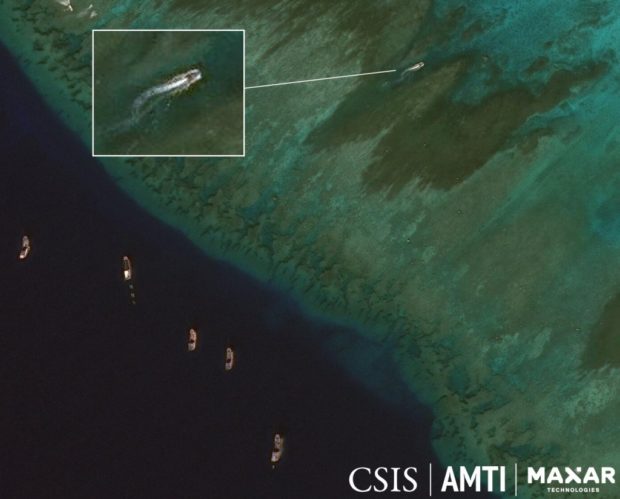 This photo shows motherships and clam harvesting boats being seen off the southwest side of Scarborough Shoal, Dec. 7, 2018. (Photo from CSIS Asia Maritime Transparency Initiative/Maxar)

Speaking to journalists at a forum for reporting on maritime security issues, the senior magistrate said that China would try to build on the shoal because the President had said that Beijing could not be stopped from building because it was too powerful.

“We all know they have a plan and they will do that before the end of the term of President Duterte, and because they will also sign the Code of Conduct,” he said.

“After they finish their reclamation and island building, they will say, ‘Let’s sign the Code of Conduct, nobody builds anything anymore,’ and it will legitimize what they have created, their artificial islands,” he added.

He said Beijing is perhaps confident that the President will not send its navy or coast guard vessels as a response should they try to build on the disputed shoal.

In his recent visit to China, the President called for the need to fast-track the Asean-China Code of Conduct to achieve regional peace and stability.

A new artificial island on Scarborough Shoal would make the disputed area permanently taken over by China and would complete their triangle of military control over the South China Sea.

The disputed shoal, a small ring of reefs, is located within the Philippines’ exclusive economic zone. China took control of the shoal in 2012 after a standoff, which later prompted the Philippines to file a case against China in the arbitration court.