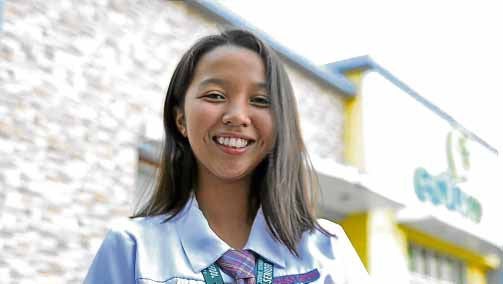 FROM TOWN COUNCIL TO COUNCIL IN UNITED NATIONS Zcyrel Barola, 17, of Donsol, Sorsogon province, represented the Philippines in a council of children and youth leaders formed by Unicef to draft a child-friendly version of the United Nations Convention on the Rights of the Child. —PHOTO COURTESY OF EDUCO PH

While most of her peers were busy with their studies or with playing video games, Zcyrel Barola, at 13, was already attending council meetings in Donsol, joining officials in that town as they tackled how to improve the lives of children in Sorsogon province.

Barola, now 17, was never told that she was too young to occupy a seat in that assembly. Donsol, she said, prides itself for being one of the most child-friendly communities in the country, where officials not only encourage but even enjoin children to take part in decision-making.

“But when I started going out,” she said, “I realized that only our community does those things for kids.”

On Monday evening, Barola talked about the importance of children’s participation in the matter of human rights at a gathering in Geneva, Switzerland.

She was there as a member of an advisory council consisting of children and the youth and formed by the United Nations International Children’s Emergency Fund (Unicef). The council was tasked with drafting a “child-friendly” version of the United Nations Convention on the Rights of the Child (UNCRC).

The convention outlines children’s rights and the responsibilities of those around them: their families, schools, communities, and their governments. But in its current form, it’s painfully apparent that the UNCRC “was done and crafted by adults, which would make it hard for children to understand its contents,” said Barola, who used to head the Donsol Federation for Children before joining children’s rights group Educo Philippines.

Over the years, the UN has endeavored to draft a more child-friendly version of the UNCRC. But this is the first time Unicef has formalized this effort, seeking out child and youth leaders from their partner networks who could give new life to the convention.

“The work of the UNCRC is really to ensure the participation of the children and to make sure that they are heard,” said Educo Asia’s communications coordinator April Sumaylo-Tesz. “If they know their rights, then they’re much more equipped to protect themselves.”

For more than a month, Barola and other youth representatives from other countries communicated online as they sought to make a version of the UN agreement that was more understandable for children.

Words like “dignity” were changed to “reputation,” “race” to “color of their skin.”

“When it’s more understandable, the child can better absorb the content,” she said. “They’re [better] able to [tell] if their rights are being violated and [know] what they have to do.”

The convention is seen as a “protective barrier” especially for poor, marginalized children, she said. For example, while her hometown of Donsol may have made great strides in behalf of children’s welfare, the Bicol region in general remains challenged by teenage pregnancy, malnutrition and undereducation.

Barola’s work with both Educo and the federation allowed her to visit places that shelter children in conflict with the law and also abused young women. She also visited remote areas in Sorsogon where schools are poorly maintained.

According to Barola, a global study by Educo and Childfund Alliance found that over 50 percent of children believed that adults don’t listen to their opinions, while 9 in 10 believe that the most important thing adults can do is to listen to what they have to say.

“In the Philippines, children are often seen as people who haven’t achieved anything in life yet, so they know nothing, or less compared to adults,” said Barola. “There’s a stigma where children are often told, ‘bata man lang ’yan, ano man ’yan (he’s just a kid, what can he do?)”

“But that is wrong—there are some things that only a kid will understand because they have a different view and perception compared to adults,” she said.

But Barola is still like any other normal teenager. Now a senior high student at Legazpi Science High School, she said she enjoys lurking on social media platforms and watching celebrity “vlogs.”

She is also an honor student at her school and hopes to enter the University of the Philippines Diliman to study social work and development.

She promised to continue her child rights advocacy even as she turns 18 next year, and advised kids to “never be contented… with being thought of only as a ‘child.’”

“Never be intimidated by those who underestimate your beliefs and abilities,” she said. “Always take a step forward, because even though you are young, you always have something.”