Halimah Yacob: Much room for Singapore, Manila to boost cooperation 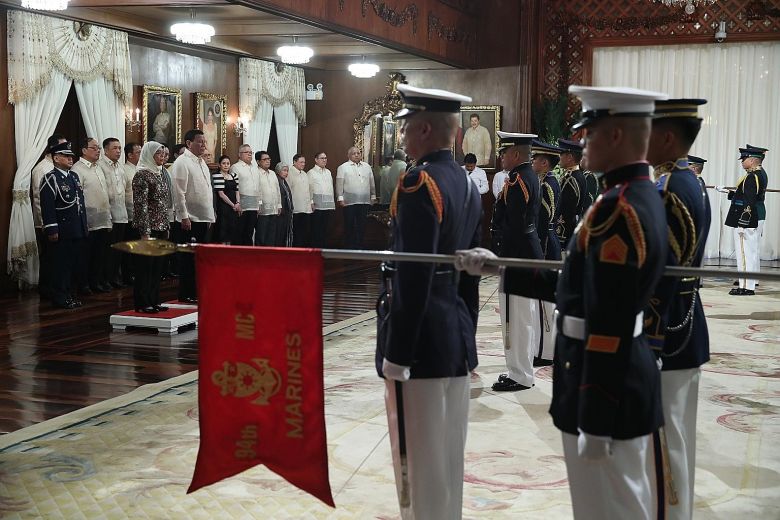 President Halimah Yacob with Philippine President Rodrigo Duterte at Malacanang Palace in Manila yesterday. Mr Duterte said they have committed to further intensify trade and investment links, being mindful of the goals set under the Philippines-Singapore Action Plan. PHOTO FROM MINISTRY OF COMMUNICATIONS AND INFORMATION via The Straits Times/Asia News Network

MANILA, Philippines — Singapore has excellent ties with the Philippines, but both countries can do more together economically and in multilateral forums such as Asean, according to President Halimah Yacob.

She was speaking at a joint news conference at the Malacanang Palace in Manila, where she was hosted by Philippine President Rodrigo Duterte.

It is Madam Halimah’s first state visit to the Philippines. She is in the country for five days to commemorate the 50th anniversary of bilateral relations between both countries.

She said: “The economic ties between our two countries are strong and robust, but President Duterte and I agreed that we can do even more together. There is room to further boost trade and investment flows.”

Some initiatives that both countries can take together include making progress in updating the Singapore-Philippines Avoidance of Double Taxation Agreement and the expansion of the bilateral Air Transport Agreement, which will increase connectivity and create more opportunities for collaboration and growth, Madam Halimah added.

“The 14th Philippines-Singapore Business Council Meeting that will be held (today) is another valuable platform for business leaders from both sides to connect, exchange ideas and strengthen economic links,” she said.

She noted that during her meeting with President Duterte, both presidents reaffirmed the strong ties between the two countries and took stock of their bilateral cooperation. They also discussed developments in Asean.

She said: “Singapore and the Philippines share the common aspiration for lasting peace and prosperity in the region. We will work closely together in Asean to promote continued dialogue so as to build a strong, united and integrated Asean community.”

In a toast speech before the state banquet hosted by President Duterte, Madam Halimah added: “We enjoy excellent ties and cooperation in wide-ranging areas. Our friendship is anchored on a shared vision of peace, stability and prosperity in the region. As we navigate through increasingly uncertain times, it is important that our two countries continue to work closely together, both bilaterally and at multilateral fora, including to advance Asean’s interest.”

She said the bilateral economic cooperation between both countries is robust and multifaceted. Singapore was the Philippines’ top Asean trading partner and the second-largest foreign investor last year. “Singaporean businesses are keen to do more in the Philippines. I understand that they are exploring new areas of cooperation such as agri-food trade and smart city initiatives,” she said.

There are more than 200,000 Filipinos living, working and studying in Singapore.

Madam Halimah will meet Singaporeans living in the Philippines later this week. She will also have a dialogue with youth at Ateneo de Davao University in Davao City.

“These exchanges between our peoples will continue to strengthen the bonds of friendship and deepen mutual understanding between our two countries,” she said.

President Duterte said in his address during the news conference that they also talked about deepening cooperation in defence and security. “(This) includes strengthening defence dialogues and training exchanges between the military and special forces.”

He added that both presidents have committed to further intensify trade and investment links, being mindful of the goals set under the Philippines-Singapore Action Plan. The plan provides a consolidated framework for strengthened bilateral cooperation in a wide spectrum of areas.

Madam Halimah said at the news conference: “There is a lot we can do together, both bilaterally and at multilateral fora, and I hope this visit can kick-start some of these new areas of cooperation. I am confident that the next chapter of Singapore-Philippines relations will be marked by deeper friendships and closer collaboration between our peoples and our two countries.”

Earlier in the day, she laid a wreath at the Rizal Park, which was named in honour of Philippine national hero Dr Jose Rizal. Dr Rizal visited Singapore four times in the 19th century.

She also toured the Intramuros, a historic walled area that is home to landmarks from the Spanish colonial era.