MANILA, Philippines – The Philippine Army and its Australian counterpart have committed to further deepen its existing bilateral ties in a regional meeting in Thailand. 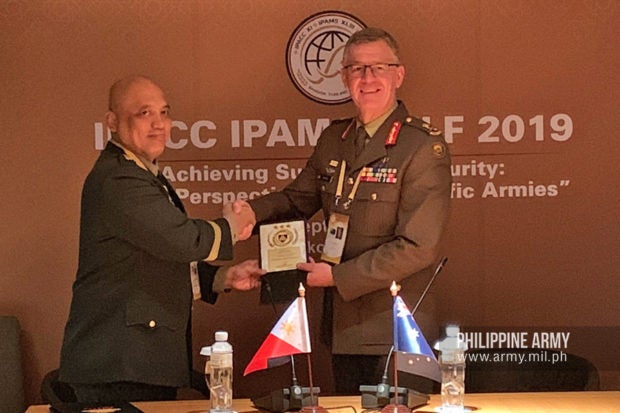 “The meeting between the two armies focused on the discussion of regional cooperation in addressing evolving threats, security challenges, and sustaining peace in both countries,” Army spokesperson Lt. Col. Ramon Zagala said in a statement.

Alberto presented the Philippines’ efforts in anti-terrorism operations and the concept of Brigade Combat Team, its rapid deployment force.

He also shared the practice of gathering its senior leaders to discuss evolving security threats.

Burr expressed his support to the intelligence efforts of the Philippine Army and the commitment of both armies in gearing up for a “future-ready land force” in their own countries.

The two leaders extended their invitation for further discussions and cooperation, Zagala said.

Both armies have developed closer ties during and after the conflict in Marawi in 2017, the longest urban war in the Philippines in recent memory.

Australia provided counterterrorism training and technical expertise to the Philippine military to support its five-month battle against local and foreign terrorists who laid siege on the Marawi City.

It has consistently shown great concern to the threat of IS-affiliated groups in Mindanao and in Southeast Asia.

Australia is the only nation other aside from the United States to have a Status of Visiting Forces Agreement with the Philippines which allows foreign troops to the conduct joint exercises here. / gsg