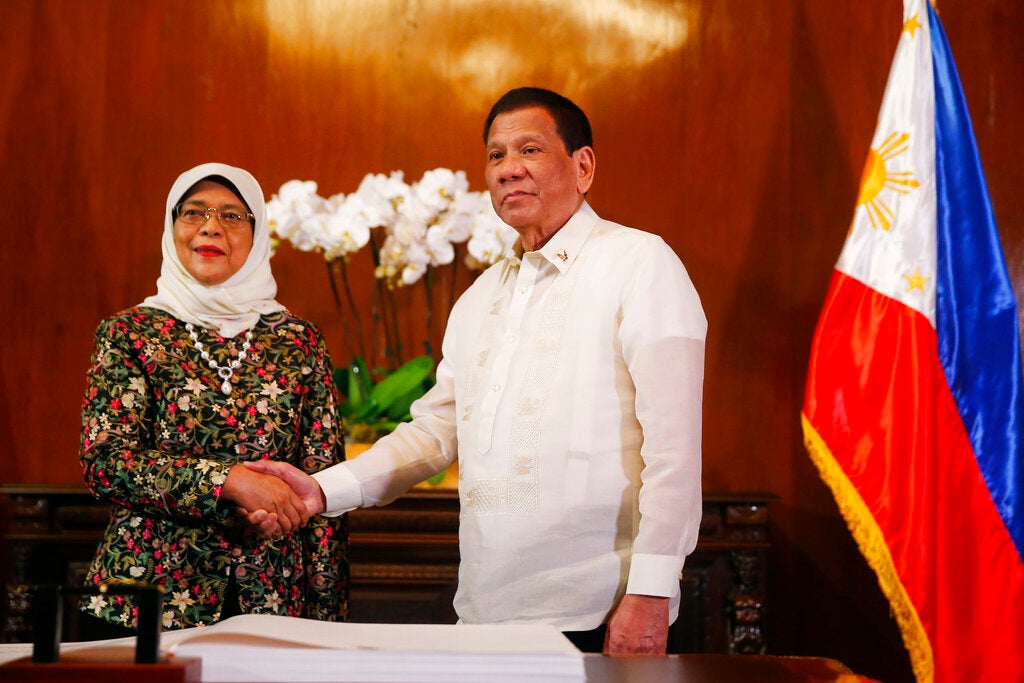 “We talked about deepening our cooperation in defense and security, which includes strengthening defense dialogues and training exchanges between the military and special forces,” Duterte said in a joint press statement in Malacañang.

Halimah is in the Philippines for a five-day official visit.

Duterte also said he and Halimah “committed to further intensify trade and investment links, mindful of the goals we have set for ourselves under the Philippines-Singapore Action Plan or PSAP.”

“I asked President Yacob’s support as we encourage further Singaporean participation in our priority investment areas,” he noted.

Singapore, Duterte said, is the Philippines’ second-highest source of investments in 2018, committing a total of 21.18 billion pesos, or 11.8% of the country’s total foreign pledges.

He added that Singapore is also the seventh-largest trading partner with two-way trade at 10.49 billion US dollars.

“I also sought to further our cooperation in agriculture, education and training, science and technology, tourism and cultural exchanges,” he said.

For her part, Halimah said that “the economic ties between our two countries are strong and robust.”

“But President Duterte and I agreed that we can do even more together. There is room to further boost trade and investment flows,” he added.

The Singaporean leader likewise said that “we hope to make progress on updating the Singapore-Philippines avoidance of Double Taxation Agreement and the expansion of the Bilateral Air Transport Agreement, which will increase connectivity and create more opportunities for collaboration and growth.”

The Philippine leader then said he discussed with Halimah “our gains in peace and development in Mindanao, particularly our progress in establishing the Bangsamoro Autonomous Region in Muslim Mindanao.”

“We discussed ways by which our cooperation could help contribute in bringing just and lasting peace and meaningful progress and development in Mindanao – one of the greatest and most crucial undertakings that our nation has embarked [upon],” he also said.

“With mutual trust, respect, and abiding amity,” Duterte added, “I am confident that we will achieve our shared goals and aspirations for our peoples.”

Halimah said there are more than 200,000 Filipinos living, working, and studying in Singapore. /kga