US admiral: Drill with Asean a positive step towards more networked region 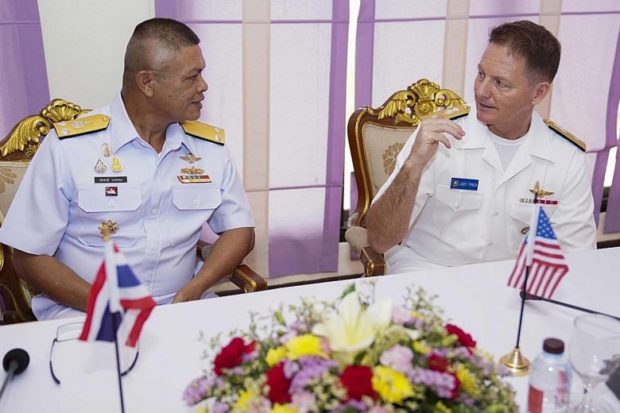 The challenges faced by countries in the maritime domain are beyond what any single nation can handle, and that is where partners and allies are force multipliers for peace and interoperability, according to Rear Admiral (RADM) Joey Tynch, commander of the Singapore-based Logistics Group Western Pacific.

“That’s an unparalleled advantage that no competitor or rival can match. I fully believe we are stronger when we sail together,” he said, adding that the exercise was not meant to be a symbolic event, but one that would provide value for each of the participating countries.

He was speaking to reporters in a conference call from Thailand, where the five-day drill began.

The exercise – the first of its kind between Asean and the US Navy – is co-led by the US and Royal Thai navies, with eight warships, four aircraft, and more than a thousand sailors participating.

During the exercise, boarding teams from the various navies will conduct search and seizure operations at sea. The sea phase takes place in international waters in South-east Asia, including the Gulf of Thailand and the South China Sea.

The US also conducts the Pacific Partnership mission, which is the largest annual humanitarian assistance and disaster relief mission in the Indo-Pacific. This year’s mission that ended in May involved countries such as the Philippines, Malaysia, Timor-Leste, Vietnam and Thailand.

Asked if the Asean-US Maritime Exercise would be held again in the future, and involve other countries, RADM Tynch said: “All our focus right now is on completing this one safely, professionally, learning as much as we can, and once this exercise is complete, we’ll take a look at what we have and make provisions looking forward.”