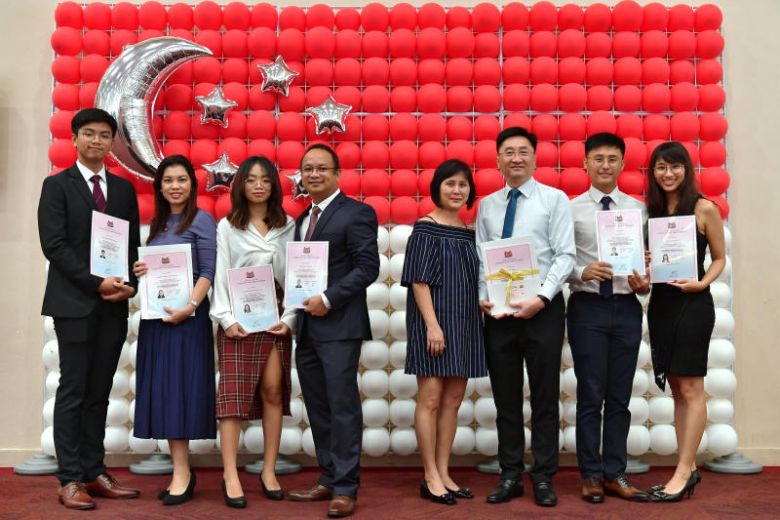 Mr Alvin Paras Dimalanta (fourth from left), his wife Michelle Anne (second from left) and their children Anne and Allen with their citizenship certificates at the annual National Citizenship Ceremony on Aug 31, 2019. Also at the ceremony were the Lam family from Malaysia: Singaporean Josephine Go (fourth from right), her husband Lam Chin Chong (third from right) and their children Joel and Jannah.ST PHOTO: NG SOR LUAN

SINGAPORE – The Dimalanta family have long called Singapore home since arriving here from the Philippines but they took their commitment to a new level on Saturday (August 31) when they became citizens.

Mr Alvin Paras Dimalanta, 45, his wife and two children, 15 and 19, took the national pledge, sang the anthem and received their pink identity cards.

Mr Dimalanta, who is regional head of IT systems operations at a Dutch bank here, said: “It gives a different meaning now when someone you do not know calls you ‘uncle’ or ‘auntie’.

“It’s a new chapter and a choice and commitment that we have made to make Singapore our today and also tomorrow.”

The family have keenly embraced one key Singaporean trait – they are passionate about food, including local favorites like oyster omelette and laksa.

Their children – Anne and Allen – have studied here since kindergarten.

Daughter Anne, an undergraduate at the Singapore Institute of Technology, said: “It’s different for my parents since they were raised in the Philippines, but for the both of us children, since we grew up here, it feels more natural (in becoming citizens).”

They were among 149 people who received citizenship certificates from Prime Minister Lee Hsien Loong at the annual National Citizenship Ceremony on Saturday.

PM Lee said it was especially significant for them to receive citizenships in Singapore’s Bicentennial year when the country is reflecting on its history and what it means to be Singaporean.

“Like you, all our ancestors came from distant lands. Eventually, they made the same fateful decision, as you have, to sink roots here and make Singapore their home,” he noted.

PM Lee told the ceremony at ITE College Central in Ang Mo Kio that taking up citizenship is a deep, personal commitment.

He quoted Singapore’s first Foreign Minister, S Rajaratnam, saying: “Being a Singaporean is not a matter of ancestry. It is conviction and choice.”

PM Lee added: “In fact, many of you have already become very Singaporean at heart. All of you have lived, worked, or studied here for years, and in some cases, even started your families here.”

He said the new citizens have integrated into Singapore society, adapted to its culture and learnt how to get along with neighbors, classmates, colleagues and friends.

At the same time, they have brought their experiences, skills, perspectives and values here.

“As you craft your life story, deepen your roots here and participate in our community life, you will contribute your bit to the Singapore story too,” he noted.

“That’s how Singapore will progress. Not just integrating new arrivals, but also evolving with you, absorbing some of your cultures and experiences, and enriching our unique Singaporean identity.”

The Lam family from Malaysia also became citizens on Saturday.

Mr Lam Chin Chong, 57, chief financial officer of a publicly listed company, met Singaporean Josephine Go, 56, in Hong Kong in 1993 when she was a personal assistant to the chief executive of a clothing company. They married there the following year.

The family also spent time in Britain and Vietnam before they settled down in Singapore. The couple have two children – Joel, 20, and Jannah, 25.

Ms Go said: “We look forward to contributing more, now that my family are all Singaporeans, it’s easier for us to move on as a family, without having to worry about things like whether the children are happy in one place.”

Joel, a full-time national serviceman who completes his full-time service next year, said he has had little difficulty integrating during his time in the army, especially after having studied at Nanyang Polytechnic.

“My section-mates during basic military training were mostly Singapore students who studied overseas for a period of time, so it was not that difficult to get along,” he added.