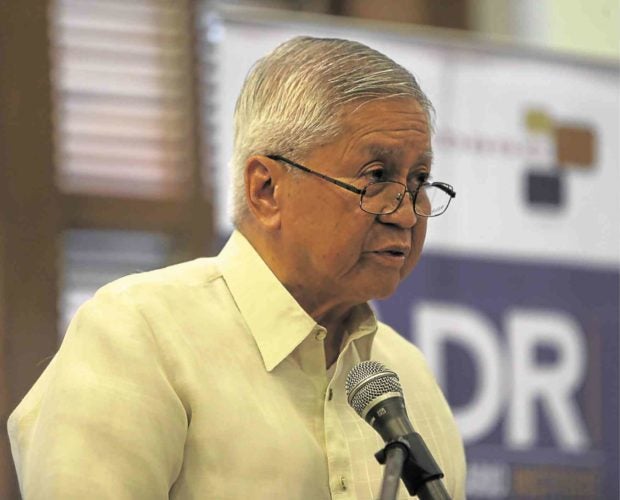 MANILA, Philippines — The Philippine government should keep on raising with China the issue of the 2016 arbitral award that nullified Beijing’s overreaching claims on the West Philippine Sea, former Foreign Secretary Albert del Rosario said on Saturday.

“The arbitral tribunal outcome is now an integral part of international law. This should have been the setting between the two presidents in Beijing,” Del Rosario said in a statement in reaction to Malacañang’s statement that President Rodrigo Duterte will not raise the issue of the arbitral award again after his Chinese counterpart reaffirmed Beijing’s position not to recognize the ruling.

“For the Philippines to have been asked to agree that it will not bring up the issue again is to effectively accept without equivocation that China is above the rule of law. This would be so wrong. It would be a betrayal of the trust we have placed in our governance,” Del Rosario said.

The former chief of the Department of Foreign Affairs (DFA), who now heads a think tank, said Filipinos “must convince our leadership that we need to strengthen our resolve, and not have it weakened.”

For next generations’ sake

He also stressed the need to prepare a strategy for taking the case to the United Nations.

“It will take time and hard work, but we must do this for the sake of our many generations to come,” Del Rosario said.

The international arbitral tribunal ruled in 2016 against China’s nine-dash claim over much of the South China Sea, including the Philippines’ exclusive economic zone, and against the maritime features occupied by the Asian power.

China refused to participate in the arbitration, the mechanism for settling disputes provided under the United Nations Convention on the Law of the Sea, of which both Manila and Beijing are signatories.

The President, who is on his fifth visit to China, raised the issue of the arbitral ruling in his meeting with Chinese President Xi Jinping on Thursday. The Chinese leader, however, stood pat on his country’s rejection of the ruling.

The President also met with Chinese Premier Li Keqiang on Friday night, telling the Asian power’s second highest official that the code of conduct on the South China Sea, which is still being negotiated by China and this region’s other actors, is the “least concern of America.”

And yet, the President also said that Western countries, as well as the member states of the Association of Southeast Asian Nations (Asean), have been pressing the Philippines about the progress on the code of conduct.

“Most of them are Asean countries, [but] the biggest urgency really comes from the Western world,” the President said.

Explaining Manila’s role on the matter, presidential spokesperson Salvador Panelo said that “with the Philippines as the designated country coordinator of the Asean-China dialogue relations, [the President] articulated his firm belief that the code of conduct would contribute in the resolution of numerous conflicts in the disputed areas of the South China Sea.”

Activist groups on Saturday slammed the President’s handling of the sea dispute.

Fernando Hicap, chair of Pambansang Lakas ng Kilusang Mamamalakaya ng Pilipinas, said “it would be more productive to rally claimant countries against Chinese territorial intervention than the repeated state visits to China that only wasted billions of taxpayers’ money and paved the way for unfair economic and trade agreements that do not benefit the Filipino people.”

“Pay a visit to Vietnam, Taiwan, Myanmar, Indonesia and Malaysia to establish fraternal relations against China and garner broad international support in the process,” Hicap said. “Through unity within the claimant countries can we only put international pressure [on] China to end its encroachment of our territorial waters.”

Bayan Muna chair Neri Colmenares added: “President Duterte must have thought that he had fulfilled his campaign promise by raising the tribunal decision. The people demand that he assert our territorial rights, like Vietnam.”

“This underscores the need for us to make our opposition stronger,” he said.

—With reports from Mariejo Ramos and Melvin Gascon