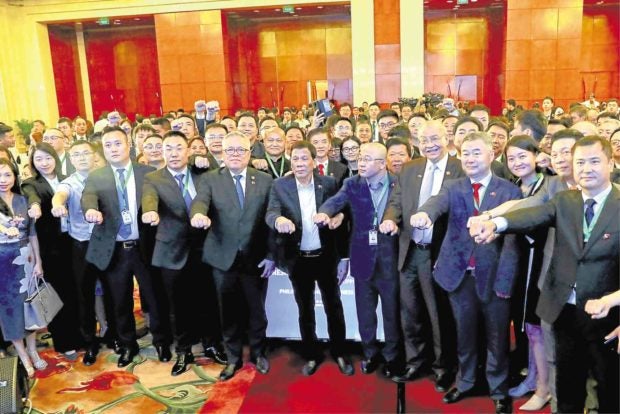 BEIJING — President Rodrigo Duterte on Friday assured Chinese business leaders here of “guaranteed” profits from their investments in the Philippines, and offered them protection from corrupt public officials.

“You are interested in profits. We will guarantee your ROI (return of investments),” the President told a business forum during the third night of his five-day official visit to China.

Easier to do business

The President said his administration had adopted measures to make it easier for Chinese enterprises to conduct business in the Philippines.

“[If] you take your money away or if you want to go or transfer, do not worry. We will not make it hard for you,” he said.

“It is not our money. It is your money. If you want to go out, if you are not satisfied or if you are losing, then by all means, tell us. [You will get] your money without any [problem] at all,” the President assured the Chinese business executives.

His administration, the President told the Chinese investors, has adopted a tough stance against graft and corruption in the bureaucracy.

“If you or your agents encounter an official asking for [money], you just tell me and I will call that official … in my office,” he said.

“Kindly bring some old money and coins with you. I will tell the official to eat the money and swallow the coins in your presence,” he added, drawing applause from the crowd.

The President had previously met with Chinese leader Xi Jinping and ranking officials in a bid to resolve the maritime dispute between China and the Philippines in the West Philippine Sea.

The President’s assurances here about getting tough on corruption come amid several ongoing investigations on multimillion-peso irregularities back home, the latest being fraudulent health claims from accredited partners of Philippine Health Insurance Corp.