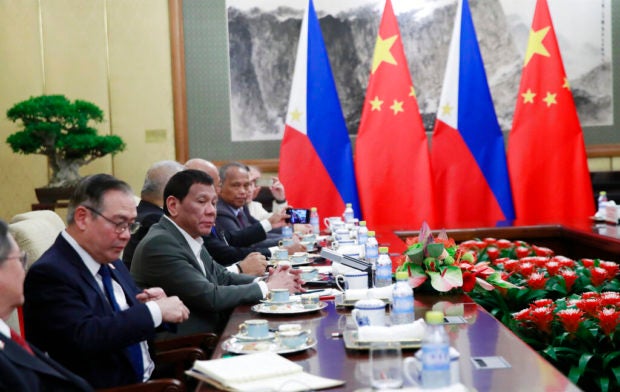 BEIJING–Member-states of the Association of Southeast Nations (Asean) and western countries have been nagging the Philippines to come up with the Code of Conduct in the South China Sea to ease tensions in the disputed sea region, President Duterte disclosed on Friday night.

“I have been the recipient of so many requests regarding the progress in the Code of Conduct that China is preparing,” the President told Chinese Premier Li Keqiang in their bilateral meeting.

“Most of them are Asean countries, (but) the biggest urgency really comes from the western world,” he said.

The President, who has been tasked by Asean leaders to lead in drafting the agreement, said the adoption of the Code of Conduct, which China has been supporting, was the “least concern of America.”

During their meeting on Thursday night, Mr. Duterte and Chinese President Xi Jinping both underscored the importance of crafting the Code of Conduct before the former steps down from power in 2022.

“With the Philippines as the designated country coordinator of the Asean-China dialogue relations, (the President) articulated his firm belief that the Code of Conduct would contribute in the resolution of numerous conflicts in the disputed areas of the South China Sea,” presidential spokesperson Salvador Panelo said.

The Chief Executive also told Xi during their meeting that the Philippines’ victory in the international arbitral court was “final, binding and not subject to appeal.”

The Chinese head of state, however, insisted that his country will not move an inch from its position and that the decision handed down by the Permanent Court of Arbitration in The Hague was unacceptable.

According to Panelo, Xi gave Mr. Duterte an assurance that China will no longer engage in “provocative and aggressive acts” such as the unauthorized entry of Chinese warships in Philippines waters and the harassment of Filipino fishermen by the Chinese coast guards.

“President Duterte and President Xi agreed on the importance of self-restraint and respect for freedom of navigation in- and overflight above- the South China Sea,” Panelo said.

ADVERTISEMENT
Read Next
DOF chief: China respects PH sovereignty on Pogos
EDITORS' PICK
Current dominant strain of COVID-19 more infectious than original—study
Water remains our saving grace right now
EuroMillions Superdraw: A lottery draw unlike any other is coming to the Philippines
DOLE: Return of OFWs’ remains from Saudi to be ‘delayed,’ deadline moved to ‘early next week’
Smart releases Hyun Bin’s second TVC
‘Justice will be done,’ Duterte assures as he vowed probe on Jolo incident to bare ‘truth’
MOST READ
Duterte tells military: No other president looked at you the way I did
Locsin warns of ‘severest response’ if China’s army drills in SCS ‘spill over’ to PH domain
Man who stole 2 cans of luncheon meat lands in jail in Manila
VP Leni Robredo: ‘Remember, you were made for these times’
Don't miss out on the latest news and information.