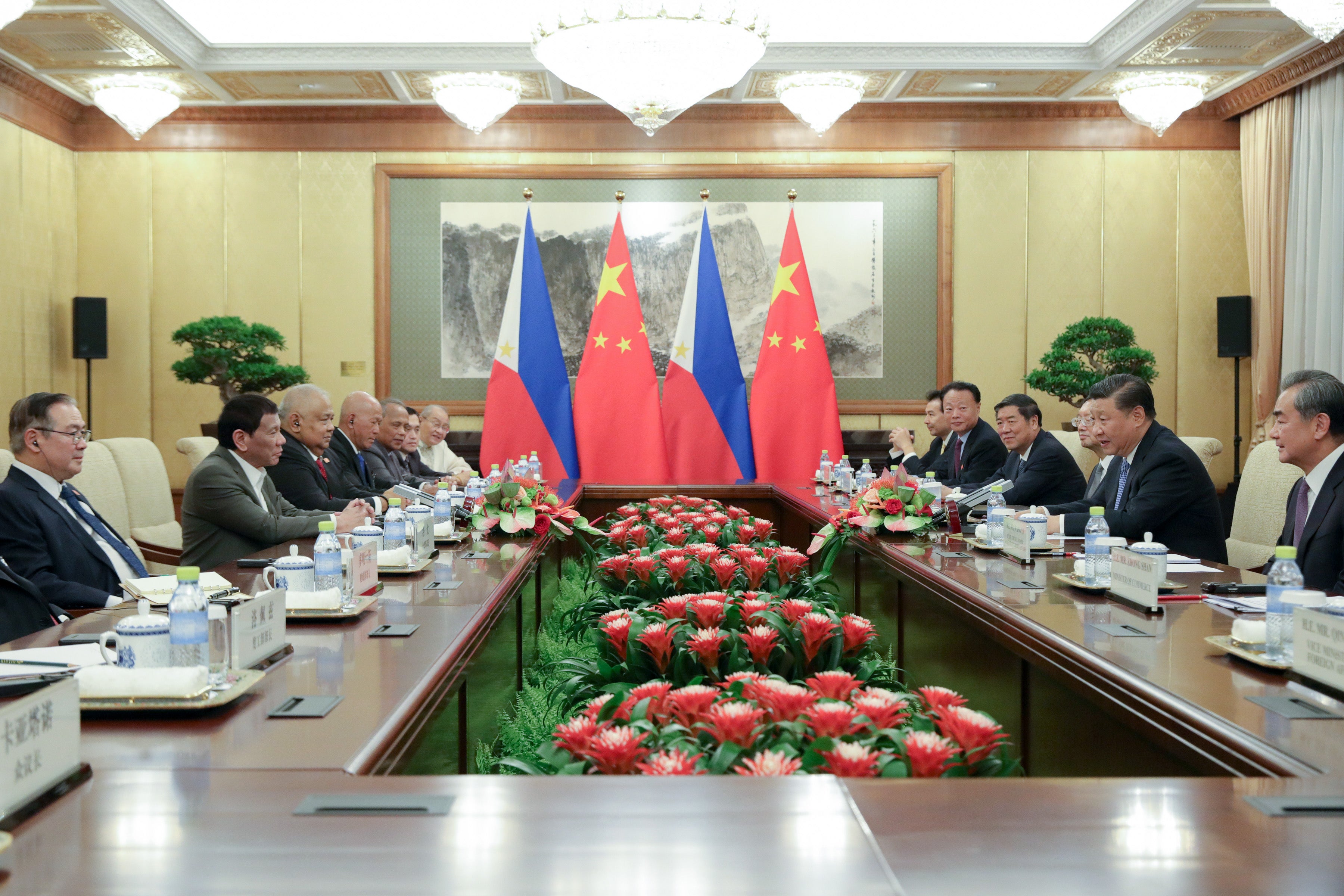 MANILA, Philippines – In his bilateral meeting with Chinese President Xi Jinping on Thursday night, President Rodrigo Duterte insisted that the 2016 Hague ruling on the South China Sea was “final, binding and not subject to appeal,” but the Chinese leader rejected the Philippines’ legal victory.

In a statement early Friday, presidential spokesperson Salvador Panelo said Duterte was “steadfast in raising with President Xi concerns central to the Philippines’ claim in the West Philippine Sea (WPS), which include the ruling held by the Permanent Court of Arbitration in the Hague.”

“He said that the arbitral award is final, binding and not subject to appeal,” Panelo said.

Xi, however, refused to recognize the ruling.

“President Xi reiterated his government’s position of not recognizing the arbitral ruling as well as not budging from its position,” he said.

Panelo said, both leaders agreed to work together, on the basis of mutual trust and good faith, to manage the South China Sea issue, and to continue to dialogue peacefully in resolving the conflict.”

In July 2016, the Philippines sealed a historic win against China before the United Nations-backed arbitral tribunal in The Hague, which invalidated Beijing’s sweeping claims in the South China Sea.

China, however, has repeatedly refused to recognize the ruling and continued with its militarization and reclamation in the disputed sea.

“Both President Duterte and President Xi agreed that while their variant positions will have to remain, their differences however need not derail nor diminish the amity between the two countries,” Panelo said.

“They shared the view that the contentious issue is not the sum total of the Philippines-Chinese bilateral relationship,” he added.

Despite not agreeing on the arbitral ruling, Panelo said Xi agreed on the need for a code of conduct in the  South China Sea.

“Chinese President Xi agreed with President Duterte that there is a need for the formulation of the Code of Conduct and it should be crafted within the last remaining years of PRRD (President Rodrigo Roa Duterte),” he said.

He said Duterte “articulated his firm belief that the Code of Conduct would contribute in the resolution of numerous conflicts in the disputed areas of the South China Sea.”

Despite talks of self-restraint, tensions have raised in the South China due to the reclamation and militarization of Beijing in the disputed sea.

“President Duterte and President Xi agreed on the importance of self-restraint and respect for freedom of navigation in – and overflight above – the South China Sea,” Panelo said.

He said Duterte also raised the possible joint exploration between the Philippines and China in the West Philippine Sea.

Panelo said Xi wanted “the steering committee created for that purpose should prepare a substantive program on the matter.”

Panelo said Duterte also “took note of the fact that the China side has recognized  and confirmed the responsibility of the Chinese fishing crew” in the Recto Bank incident which involved the sinking of a Philippine fishing boat by a Chinese trawler.

“He expressed appreciation of China’s readiness to provide compensation to our fishermen who almost lost their lives,” he said.

Philippine ambassador to China Jose Santiago Sta. Romana said Thursday that China was “very sorry” for the Recto Bank incident, where 22 Filipino fishermen were abandoned in open sea after a Chinese trawler hit their boat on the night of June 9.

The owner of the Chinese fishing vessel has also apologized through a letter sent to the Philippine Embassy in Beijing.

Despite his differences with Xi, Duterte was quoted by Panelo as saying that the bilateral meeting “went very well.”

Six deals on the areas of education, science and technology, and economywere signed during the visit.

Panelo said Duterte’s activities in China “are a reflection of continued good faith and warm friendship between the two presidents, and undoubtedly, a testament to the enhanced and enduring bond between the Philippines and China.”

Duterte and Xi, he said, “are on the same page on the belief that the foundation and future of their countries’ friendship cannot be anchored to their respective positions on the subject, and that the basis of their ties is their centuries old friendship as well as the benefits that will redound to their peoples by virtue of their cooperation.”  /muf