MANILA, Philippines –  China has already apologized to the Philippines over the sinking of a Filipino boat by a Chinese trawler at the Recto Bank in the West Philippines Sea on the night of June 9.

“The Chinese government through the foreign ministry has expressed they are very sorry about the incident through diplomatic channels already,” Philippine Ambassador to China Jose Santiago Sta. Romana said in televised press briefing in Beijing on Thursday.

Sta. Romana revealed this a day after the letter of apology of the owner of the Chinese trawler that sank the Philippine fishing boat Gem-Ver was released to the public. 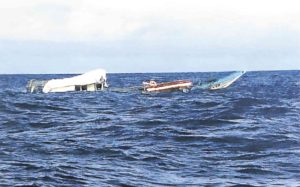 It was not clear, however, if China made the apology in writing or was made verbally.

The revelation that China has already issued an apology came as President Rodrigo Duterte is in China where he is expected to raise the 2016 Hague ruling that invalidated Beijing’s sweeping claims in the South China Sea.

The Recto Bank incident left 22 Filipino fishermen abandoned at sea before they were rescued by Vietnamese fishermen.  /muf