MANILA, Philippines — Cory Marcelo flew back home to the Philippines with a severe spinal injury and the story of her escape from what could have been a dreadful fate. 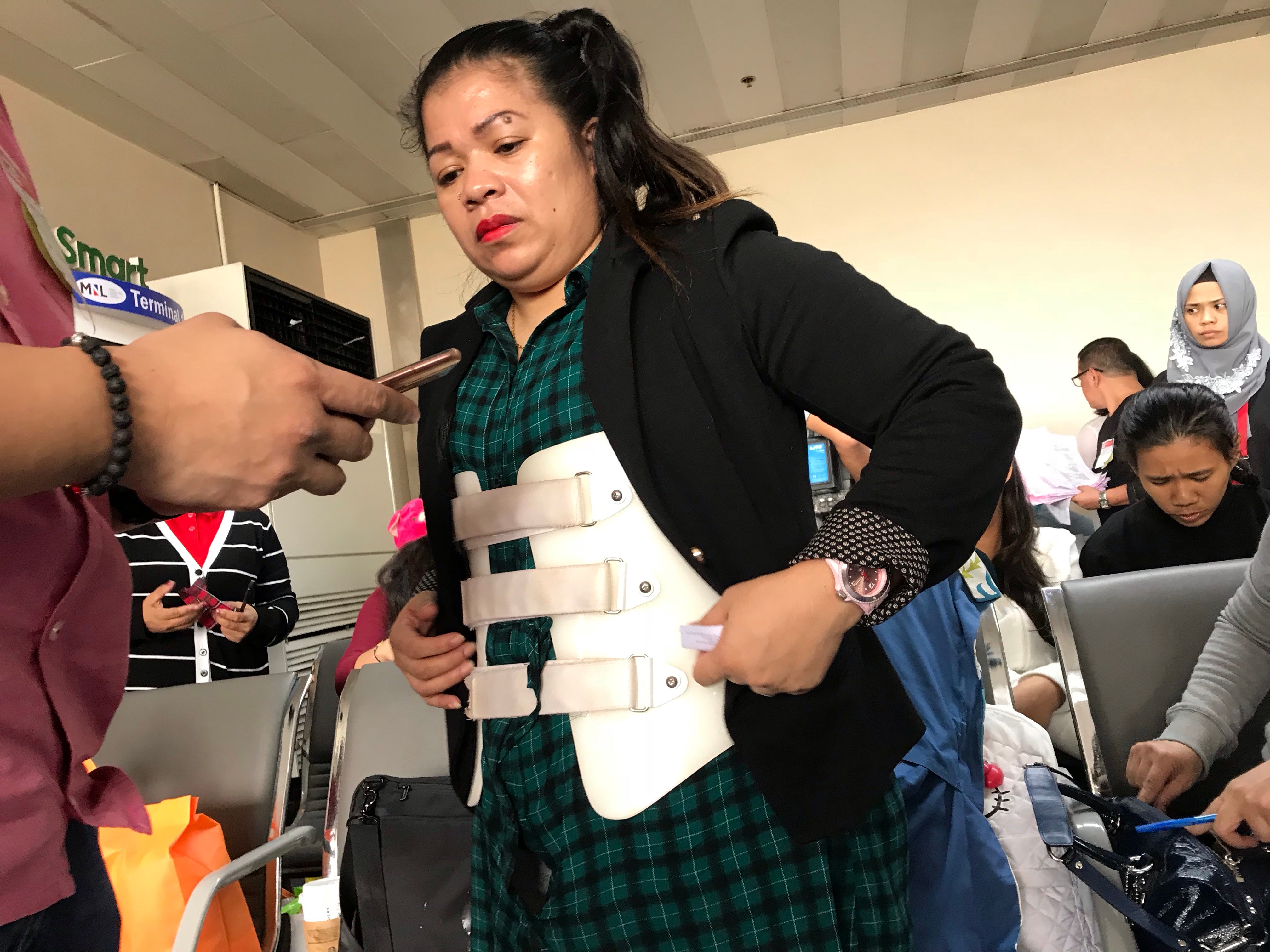 Marcelo arrives in Manila on Friday, August 24, 2019, wearing a clamshell brace after sustaining injuries during her escape from a man who bought her from her employer in Saudi Arabia. Photo by Christia Marie Ramos/INQUIRER.net

The 33-year-old domestic worker from Cagayan de Oro was among the more than 100 overseas Filipino workers (OFWs) who were flown to Manila from Riyadh on Friday.

“Nahulog po ako sa third floor dahil tumakas po ako,” ( I fell from the third floor when I escaped) she told reporters when she arrived at the Ninoy Aquino International Airport together with her fellow OFWs.

This after her Arab employer, whom she started working for in August last year, sold her to a “fake police officer” in May 2019.

“Inakyat niya ‘ko sa third floor, nakita ko po dun yung mga kababayan nating Pinay, pang-pito po ako. Ni-lock kami sa room. Ang sabi ng mga kasama ko, binibenta daw sila don, five months na silang nagtiis do’n. Hindi sila makatakas kasi nila-lock yung room,” (Inside the room. I saw several other Filipinas. I was the seventh to be brought in. The other women told me that they too had been sold and that have been there for five months already) she added.

Five days after she was brought to the home of the man she was sold to, Marcelo said she tied up blankets and made her escape.

Despite feeling extreme pain, she said she tried to run as three men started chasing her.

“Pinilit kong lumaban kahit tatlo sila. At hindi lahat ng Arabo masama, kasi ang tumulong sakin…binatang Arabo po, tumawag siya ng pulis kaya nasugod po ako sa ospital,” (I tried to fight them off even if there were three of them. Not all Arabs are bad. A young Arab man helped me and called the police) she said.

“Actually sabi ng doktor hindi na ko makakalakad pero himala po walang imposible sa Panginoon, nakalakad po ako,” (The doctor said I will no longer walk but there is nothing impossible with God. I am walking now). she added.

The Philippine Overseas Labor Office in Riyadh then took her in a shelter after being confined in a hospital for a month.

After three months in the shelter, she was finally able to board a flight back to Manila.

Labor Secretary Silvestre Bello III, who was in the same flight as the repatriated OFWs, said government continues to monitor the condition of Filipino workers abroad.

“We will not allow our workers to be deployed kung sa tingin namin di natin maprotektahan ang kanilang kalagayan,” he told reporters in a separate interview.

According to Hans Leo Cacdac, the administrator of the Overseas Workers Welfare Administration (OWWA), the batch of OFWs repatriated on Friday was among those under the repatriation program of the government.

Those who were flown home were either maltreated, were physically, or mentally abused by their employers while some opted to leave their job abroad due to poor working conditions or employment contract violations, Cacdac said.

OFWs from Saudi Arabia, he added, comprised 30 to 40 percent of those repatriated.

Marcelo, who has five children, reminded her fellow OFWs not to allow themselves to be abused.

Read Next
Philippines to buy two new corvettes from South Korea
EDITORS' PICK
Pagasa: Warm, sunny Sunday in most parts of PH
Is it safe to talk politics again at family gatherings? ‘The Reconciliation Dinner’ shows us what that’s like
House energy committee chair Arroyo bats for cheap electricity
EDITORIAL: To a bike-friendly future
The Best Tech Gifts For The 2022 Holidays
vivo’s coming to town to grant wishes with more holiday promos
MOST READ
LOOK: Vhong Navarro transferred to BJMP detention facility in Taguig
The Elephant Man in the Senate
Posh village as ‘shabu’ haven
LOOK: Zanjoe Marudo bonds with Ria Atayde, her family
Don't miss out on the latest news and information.