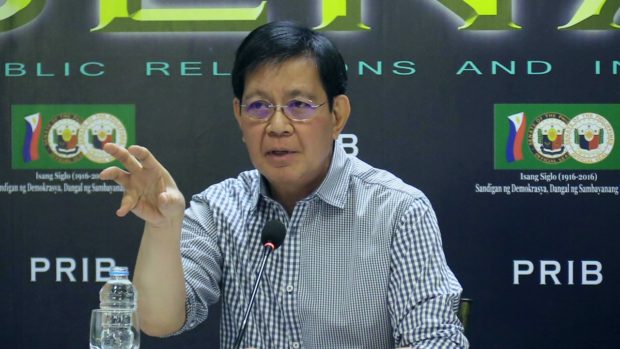 MANILA, Philippines — Sen. Panfilo Lacson urged the Department of Foreign Affairs (DFA) to pursue more Transfer of Sentenced Persons agreements with other countries as he noted efforts of the government to assist Filipino drug convicts abroad while “we’re killing people” in the Philippines.

“How do you reconcile [the fact that] here in our country we’re killing people and then we’re saving drug convicts detained in another country. I’m just curious,” Lacson asked Foreign Affairs Secretary Teodoro Locsin Jr. on Monday during the organizational meeting of the Senate Committee Foreign Relations.

“Going back to the repatriation of Filipino convicts, maybe you should pursue more Transfer of Sentenced Persons treaties, just like what we have with Spain. I’m just wondering if they would agree to be transferred to Muntinlupa [that is, the New Bilibid Prison] from where they are being detained abroad,” he added, speaking partly in Filipino.

Under the Treaty on the Transfer of Sentenced Persons, individuals tried and convicted in a foreign country would have the option to serve their time remaining their sentence in their home country.

Lacson issued the statement after the DFA presented data during the meeting showing that most Filipinos overseas were detained due to drug charges.

The DFA extends financial and legal aid to Filipinos abroad, including those detained or convicted, through the assistance to nationals (ATN) or the legal assistance fund (LAF).

According to DFA Undersecretary for Migrant Workers’ Affairs Sarah Lou Arriola, P1 billion is allotted for the ATN while the LAF has a budget of P200 million.

She further noted that Filipinos on death row overseas due to conviction in drug cases had been provided with lawyers “since the inception of the case.”

“It’s just that many of them are drug mules or some of them, like in the case in Mexico we have constructive possession of drugs in a ship, but we make representations with the countries of destination that we ask for due process and speedy resolution of the case,” she said.

In July, the DFA reported that 19 Filipino seafarers were being held in Mexico allegedly over illegal drugs.

READ: Filipino seafarers are presently being held in Mexico allegedly over illegal drugs

“We are not saying that they [Filipino convicts abroad] should not be punished, but since they are our nationals, we take care of them, we monitor how they are treated, we look at their condition. So is that a way to rationalize?” Sen. Aquilino Pimentel III, chair of the Senate foreign relations committee, said.

“Cause we will never ask a foreign country, do not punish our countryman who is involved in drugs because we also will jail him here if he violates our loss. But when you incarcerate him and you punish him, we should be allowed to take a look and pay a visit to our countryman and look at his condition or situation,” he added.

According to Lacson, a possible justification for the DFA effort to assist convicts overseas is that the Philippine government will treat them as “Filipinos first and convicts later or second.” Locsin agreed to this.

“If our intention is to really take care of our own nationals, it would be better if they were here. So maybe in coordination with hose foreign countries, we can pursue that path,” Lacson said.

Read Next
PH students conquer China in Math contest
EDITORS' PICK
DILG to stranded workers: ‘Stay where you are’ until Luzon-wide quarantine is over
BREAKING: 1,075 people in PH has coronavirus disease – DOH
Style and music journeys with Claudia Barretto
UP-PGH wards for COVID-19 patients finished in 5 days
IATF: Food firms to operate with 50% of workforce during Luzon quarantine
Cebu City closes its borders
MOST READ
Pacquiao to seek probe on leaked private letter from Barangay Dasmariñas
Tootsy Angara bares neighbor wanted them out of village
All 3 COVID-19 positive patients in Bicol sent home
BREAKING: 1,075 people in PH have coronavirus disease – DOH
Don't miss out on the latest news and information.